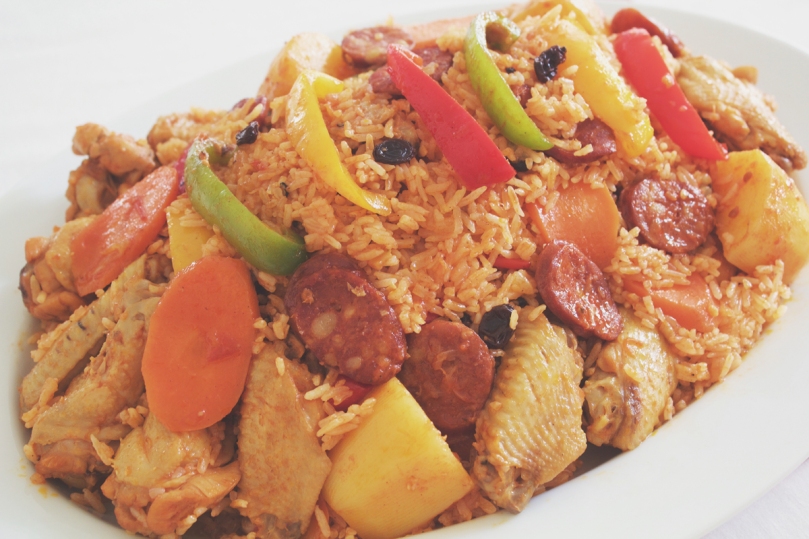 Hello Everyone! Festive Filipino Foods Day 02 of 12 is here with a Latin American dish known as Arroz a la Valenciana, also considered as a part of Filipino cuisine, to share. Arroz a la Valenciana is quite commonly known as a poor man’s paella as the ingredients used to make this is is far less lavish than that of paella, where wine is used for a flavourful Spanish rice dish and a lot of seafood ingredients. The main ingredients in Arroz a la Valenciana consists of glutinous (sticky rice), regular rice, tomatoes, tomato paste, potatoes, carrots, capsicum, chicken, and chorizo – a complete meal, a one-dish meal of meat, rice, and vegetables. It is a great dish for Noche Buena, Christmas, Fiestas, weddings, birthdays, and family get-togethers.

Well, that’s pretty much all I can talk about for this dish, so let’s move on to the recipe shall we? 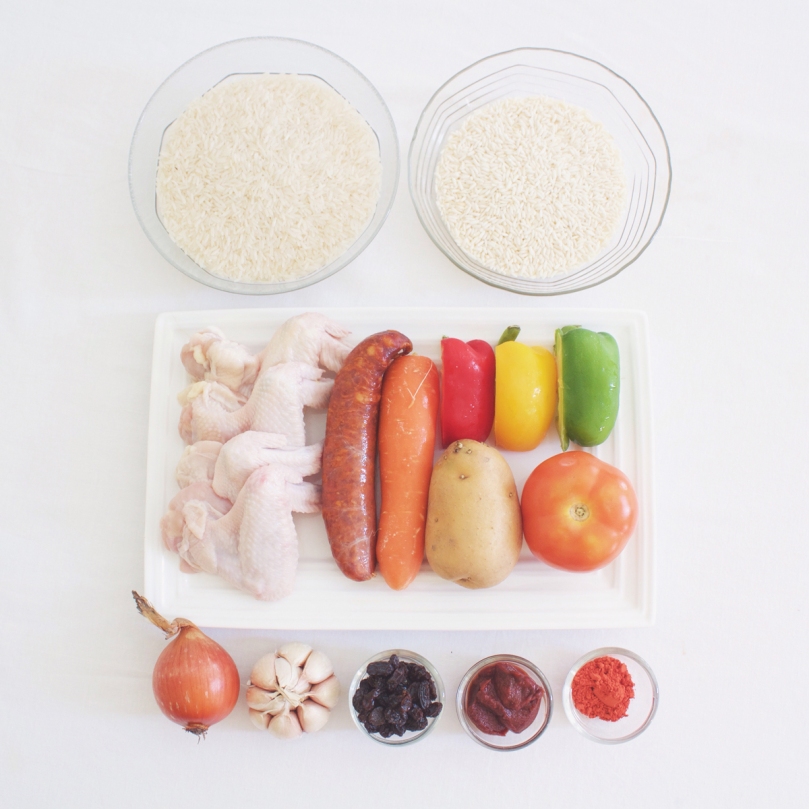 */**Cook the rice together in a rice cooker; what I usually do for every one cup of rice, I add one cup of water. But in this instance, you want your rice to still be a bit tough and half-done because it will absorb the sauce from when you sauté your chicken. 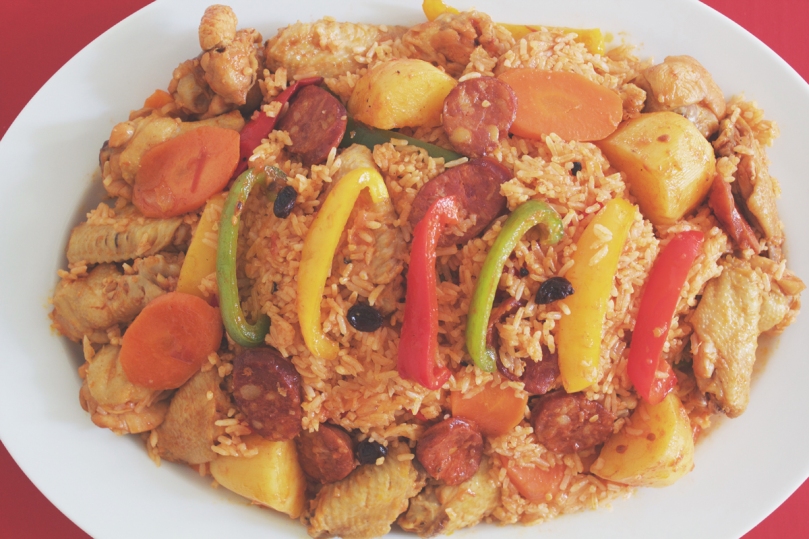 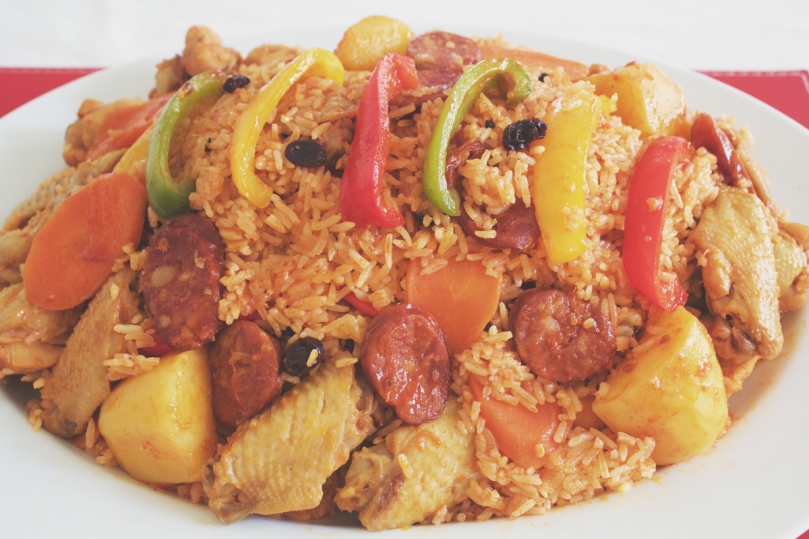 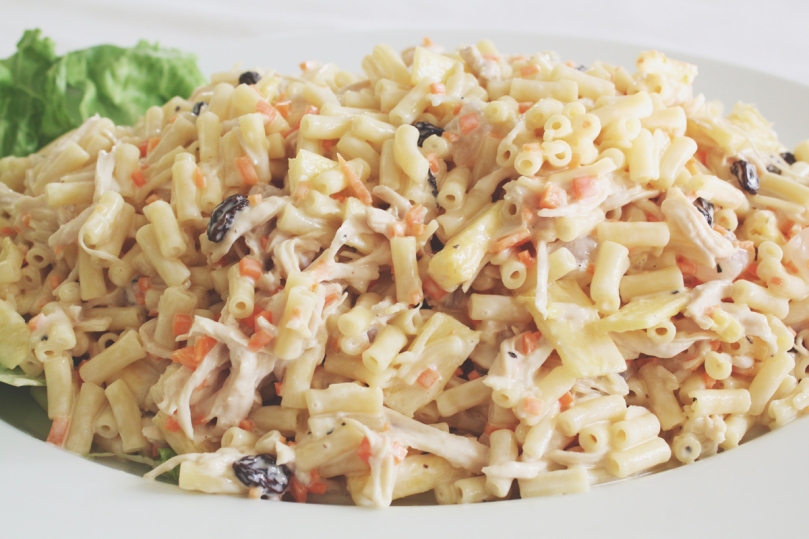 Hello Everyone! It’s been a while since my last post – but if you are a regular reader, you would’ve picked up from my last post that I’d be taking a short break. It’s not because I needed some time to recover from my mental exhaustion (because let’s face it, I’m still always mentally drained by the end of a long day), but more for the theme for this month’s recipes. From today onwards, you will be expecting a recipe every single day leading up to Christmas – you read that right! I will be sharing with you Festive Filipino Dishes that can be found on the tables of a Filipino family during Noche Buena, some of the recipes that I will be sharing have been influenced by Spanish cuisine. So let’s kick off Day 01 of 12 days to Christmas with a sweet (or savoury?) one: Filipino-style Chicken Macaroni Salad.

First off, for those of you who don’t know, Noche Buena is the Spanish word for the night of Christmas Eve. In Latin American cultures, including Spain and the Philippines, Noche Buena is an annual traditional family feast. The traditional dinner is celebrated at midnight after attending the late evening Mass known as Misa de Gallo. In the Philippines, a whole roasted pig known as lechón, is the centre of all dishes during the feast. It is believed that the tradition dates back to the 15th century when Caribbean colonists hunted down pigs and roasted them whole as the family gathered for Christmas Eve. However, a whole roasted pig isn’t always served in other cultures. For example, in Peru, a large juicy turkey is the star for Noche Buena while in Venezuela, hallacas are quite popular. Actually, I think I may have explained what Noche Buena is in a post last Christmas? I’m not sure. Oh well!

Tonight’s dish is one of the many that can be found on the table during Noche Buena, but it doesn’t stop there. This dish is also typically served during Filipino fiestas and also during family outings and picnics. It is actually a very simple dish that doesn’t require a lot of cooking and complicated steps. The main “cooking” is basically cooking the macaroni until tender, and the chicken to be boiled and shredded. When those core ingredients are ready, all you have to do next is toss all the ingredients together and voilà! Chill it in the fridge for a couple of hours and you’ve got a tasty chicken macaroni salad. 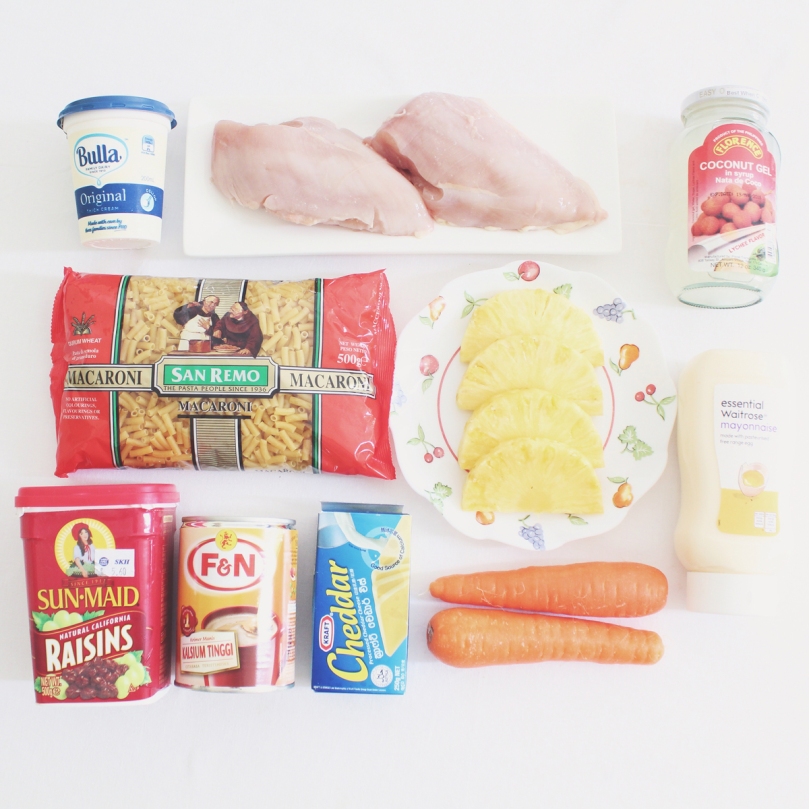 *Aside from macaroni, you can use other types of short cut pasta. Here are some examples: Mostaccioli, Penne, Rigatoni, Cellentani, Rotini, Cavatappi, Fideuà, and Maccheroncelli. 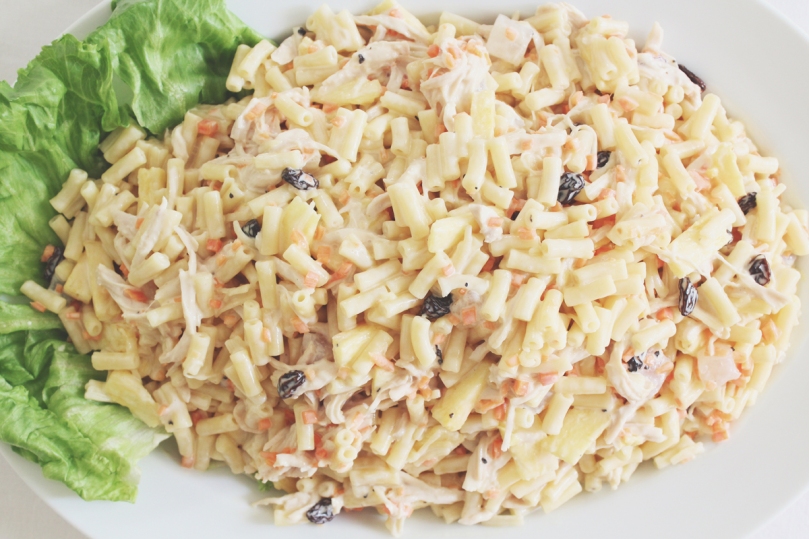 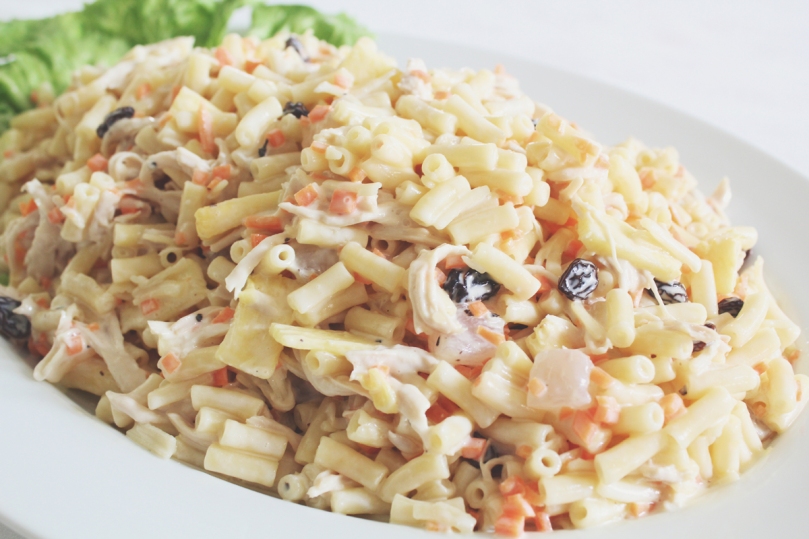