Hello Everyone! Okay I lied… Well not exactly. You see, last week I said that that would be my last Coconut post for the month. Technically it is since it’s already February, but I do have one more Coconut post to share *cheeky grin* The recipe that I’m going to share with you guys tonight was actually not planned at all. I didn’t want this to end up in my already growing archive of recipes that I never get around to posting because it doesn’t fit with the current theme that I have going. Lucky for me tonight’s dish still fits! Let’s just say that this is a special Chinese New Year post to welcome in the Year of the Pig!

I saw a post on Instagram a while back, towards the beginning of the year I believe, of a new dish that Max’s Restaurant put out which is their Adobo Ribs. I haven’t had the chance to try it yet, but it made me want to try it out at home for myself, with my own twists of course – the twists being adding chipotle peppers for a spicy kick and stewing them in coconut milk as well – to fit with the theme of course *cheeky grin* 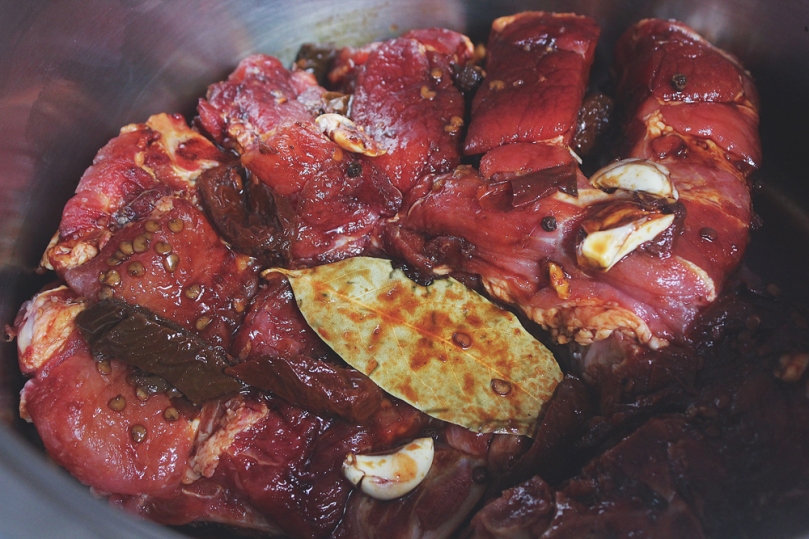 Adobo can mean marinade, sauce, or seasoning. It is a highly popular Filipino dish amongst locals and even foreigners. I remember when I was still studying in Australia, my taxi driver asked me where I was from. I told him that I was born in Brunei, but a Filipino by blood. To which he replied, “Oh I love the Philippines! And I love… What’s that dish called? Chicken Adobo!” Basically any non-Filipino that I’ve talked to throughout the years, Chicken Adobo and Sinigang are their favourite Filipino dishes.

Anyway, the cooking process of adobo is indigenous to the Philippines. Pre-colonial Filipinos often cooked or prepared their food with vinegar and salt to keep them fresh longer in the tropical climates of the country. To make adobo, you start off by marinating any variant of meat, seafood, or vegetables in vinegar, soy sauce, fresh garlic, black peppercorns, and dried bay leaves. It is then simmered in the marinade until the meat is tender. The dish is characteristically salty and sour in taste.

Now adding gata to the classic adobo makes the dish not only hearty, but also rich and creamy. Would you believe me if I said I’ve never had adobo sa gata before? I mean, I’ve had adobo countless of times growing up, but never with gata – until about a few weeks ago when we had lunch out after our Sunday morning mass. It felt like I had discovered a whole new world of adobo! 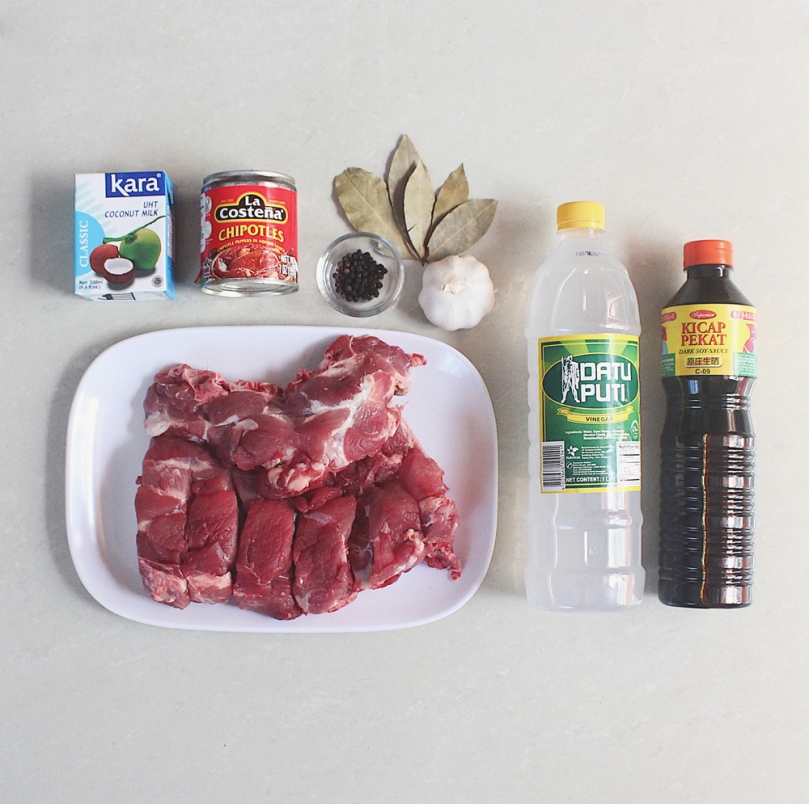 *Residual heat, or residual cooking, or carry-over cooking, is when food continues to cook after it has been removed from a heat source. The heat held within the food itself raises its overall temperature before it starts to cool down. 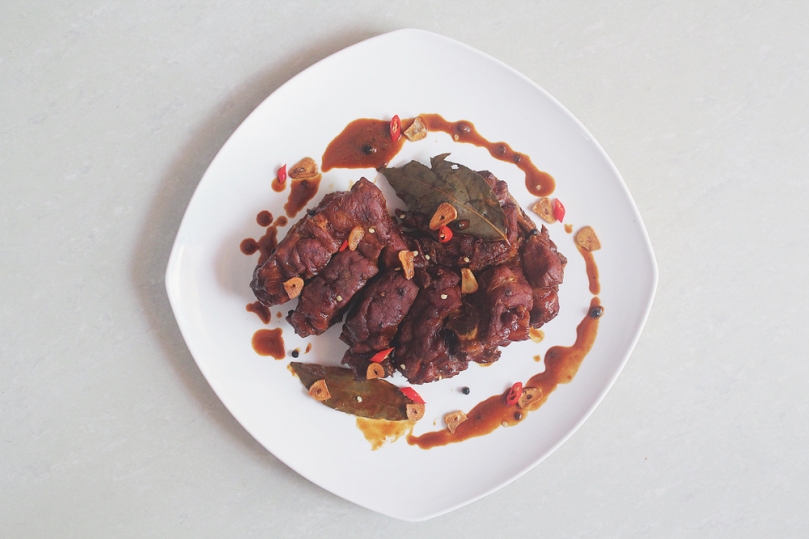 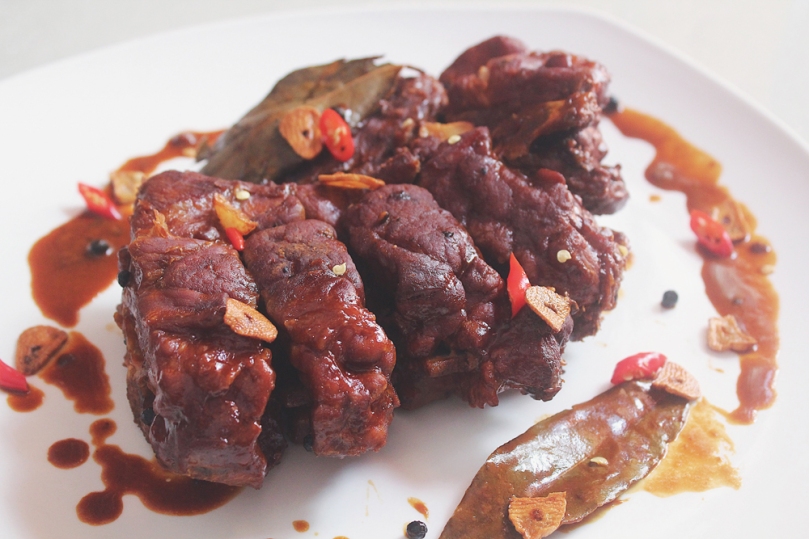 And with that, I would like to wish all my Chinese Family, Friends, Followers, and all those who are celebrating, a Happy Chinese New Year! May the Year of the Earth Pig bring you happiness, prosperity, good health, peace and success! 恭喜发财 Gōngxǐ fācái!

Hello Everyone! You guys must be thinking that I’m on a roll here! Three consecutive recipes?! Don’t get used to it because it’s just for this one time to get everything wrapped up for this month so that I can start a new theme for the month of June! I did mention in a couple of posts back that for the month of June, I’ll be switching up my upload schedule day to Mondays, and the reason does indeed correlate to the theme. I’ll keep everyone on their toes for a while longer and come Monday, all will be revealed!

I had lots of fun last night a my friend’s place for sungkai (iftar) and of course to celebrate her daughter turning 1! Tonight’s post is a little later than usual this time around because I literally just came back from another night out for a sungkai catch up dinner with friends. I’ve probably mentioned this before in a post somewhere on this blog, but I’ll mention it again just to clear things up – I’m not a Muslim. I don’t practice ramadhan which then subsequently means that I don’t have to break fast for iftar. Yes I was born and bred in a Muslim country, and even though I have been exposed to these practices for practically my whole life, I wasn’t born into the religion (hint on the ‘Third Culture Foodie’!).

Anyway, tonight’s recipe is sort of another way you can use leftover Ropa Vieja to make similar, but not so Eggs Benny dish. Okay, I mentioned in yesterday’s post about this Latin American café that Jialing and I found during one of our “Fatness Fridays” adventures. While I thought back to this day, I was totally convinced that the Huevos Rancheros dish that I had was a marriage of it and the Ropa Vieja sandwich that Jialing had, but it wasn’t until I scrolled through hundreds of Instagram photos on my feed to recall the dishes to find out that they were two separate things. 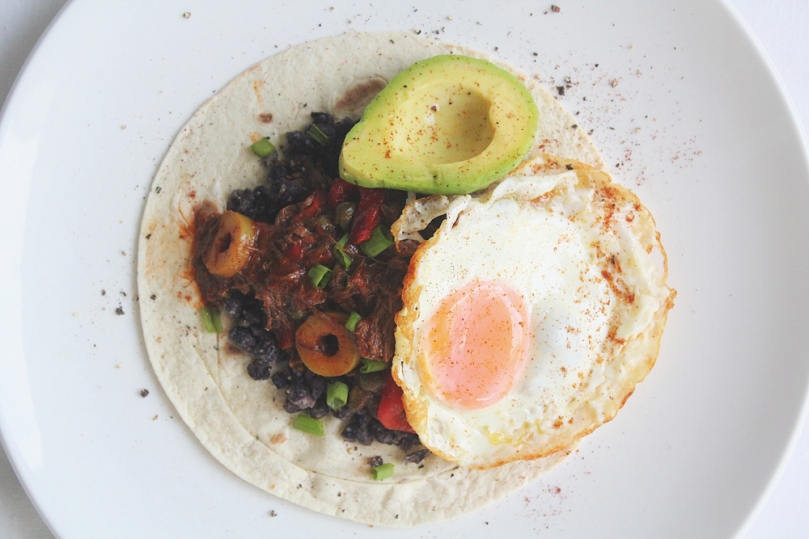 In my last post I said that a Ropa Vieja Eggs Benny came into mind – which it did, but that wasn’t they way I had initially imagined it. In fact, this Ropa Vieja con Huevos Rancheros was how I pictured the ‘Eggs Benny’ dish to look, but in the end I decided to reimagine it just because this didn’t really have the feel of an Eggs Benny dish. However, I didn’t want this dish to end up in my archive of ‘will never get around to posting’ but since this dish is sort of related to the last two I posted, I thought I’d share the recipe with you! I mean, it’s essentially, well practically identical to the last recipe, just a few minor differences, especially with the plating.

Huevos Rancheros, or in English “rancher’s eggs”, is a traditional breakfast dish served as a mid-morning fare on rural Mexican farms – hence its name. The dish is made up of fried eggs that is served atop a lightly fried tortilla (traditionally corn, but other adaptations have used wheat tortillas instead), with a tomato-chilli sauce, refried beans, and slices of avocado or guacamole. You could say that my adaptation to marry Ropa Vieja and Huevos Rancheros together is an amped up version of a humble and traditional Huevos Rancheros brekkie. 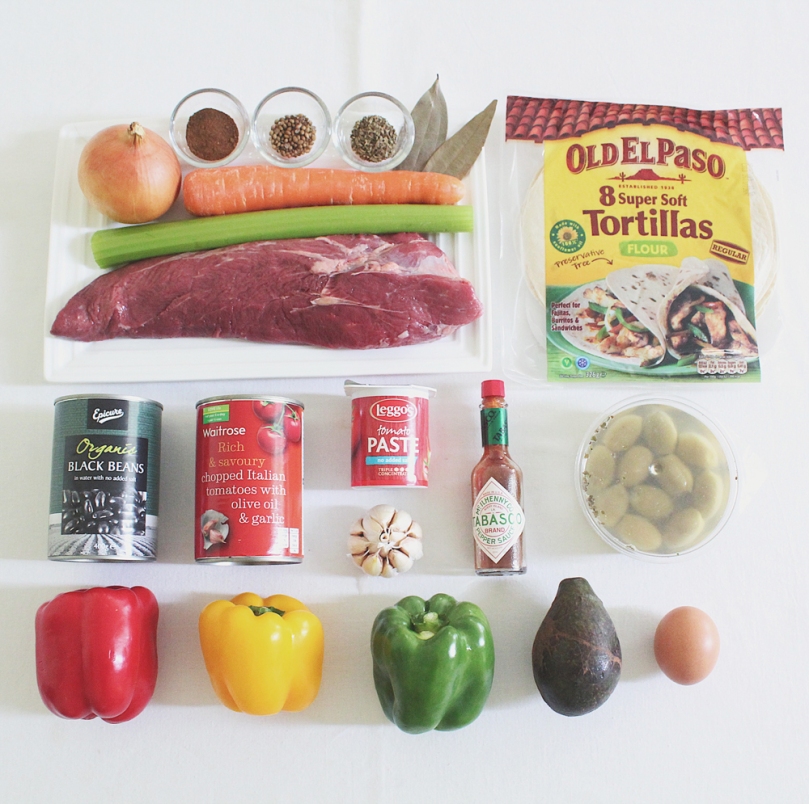 *Provided that you’ve made your Ropa Vieja ahead of time, i.e. the night before, if not then make sure you allocate yourself 3-4 hours altogether for this recipe 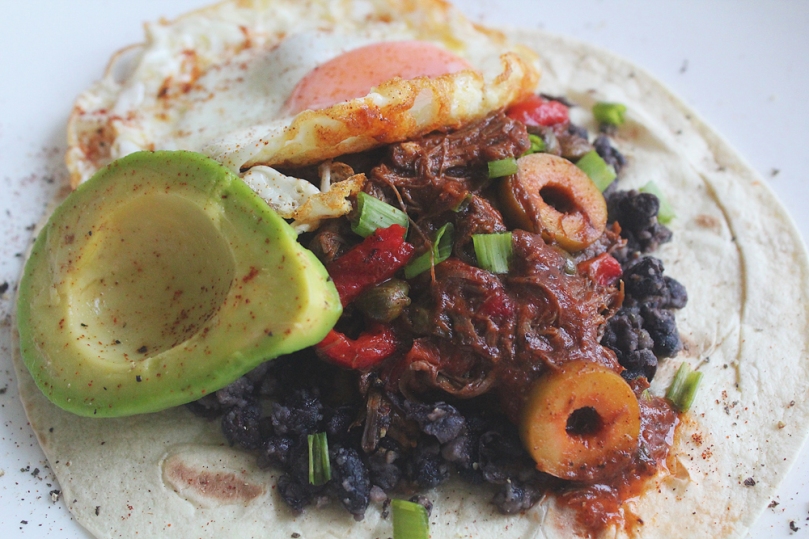 Tune in on Monday for an all new theme and a bunch of yummy recipes!

Hello Everyone! I’m getting this post up way earlier than I usually do just because I’m about to leave and head on over to a friend’s house to celebrate her daughter turning 1 today! I can’t believe the little munchkin is a year older already – it felt just like yesterday I was holding her in my arms just only being 2 or 3 months old. Gosh how time flies by so quickly! With that being said, I honestly have no idea what time I’ll be back home tonight and thus the early upload.

Tonight’s recipe is a branch off from the Ropa Vieja recipe that I posted just last night. When I was thinking of what other Eggs Benny recipes I could whip up to share with you guys, I immediately thought back to the time Jialing and I had our weekly “Fatness Friday” sessions in-between our classes in search of great food at cafés and/or restaurants that we have yet to explore. One Friday afternoon, we came across a Latin American café in Surry Hills (no, not Cafe con Leche hehe) I don’t actually remember the name of the place. Jailing had the Ropa Vieja sandwich while I had their Huevos Rancheros, and BOOM! A Ropa Vieja Eggs Benedict dish came into mind. 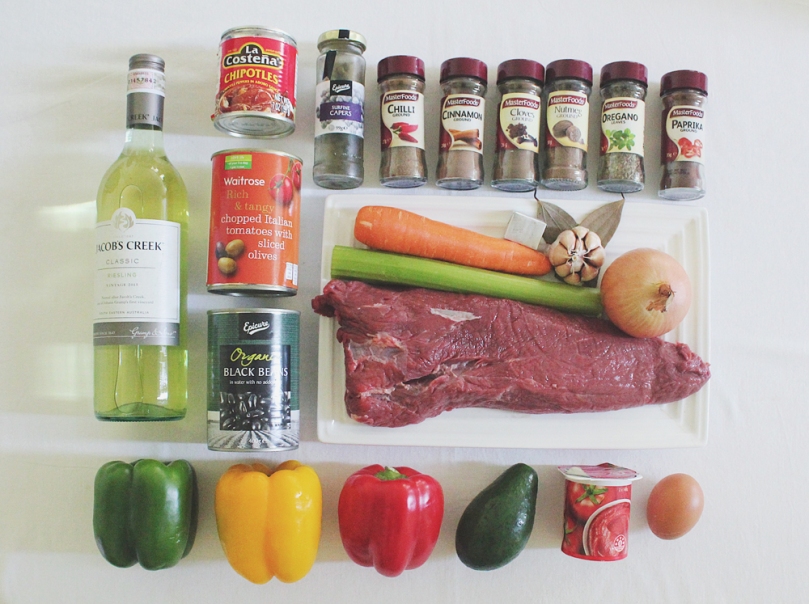 *Provided that you’ve made your Ropa Vieja ahead of time, i.e. the night before, if not then make sure you allocate yourself 3-4 hours altogether for this recipe

For the eggs benedict

For the tabasco hollandaise sauce 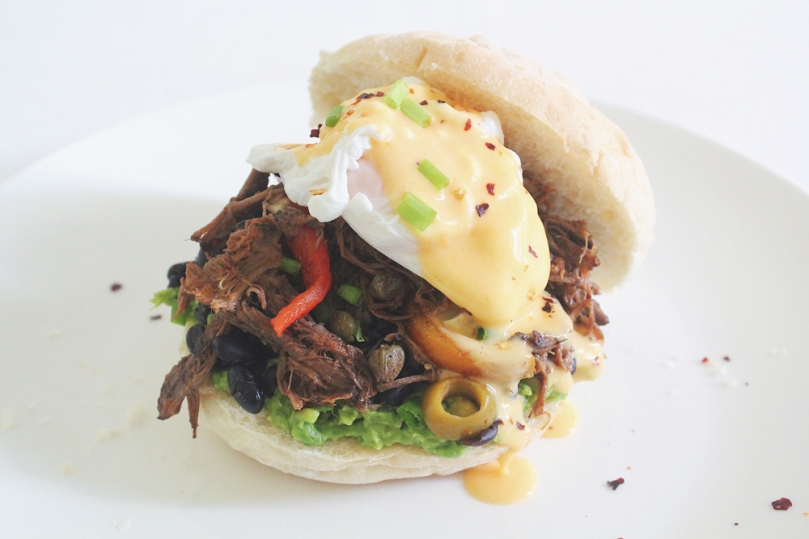 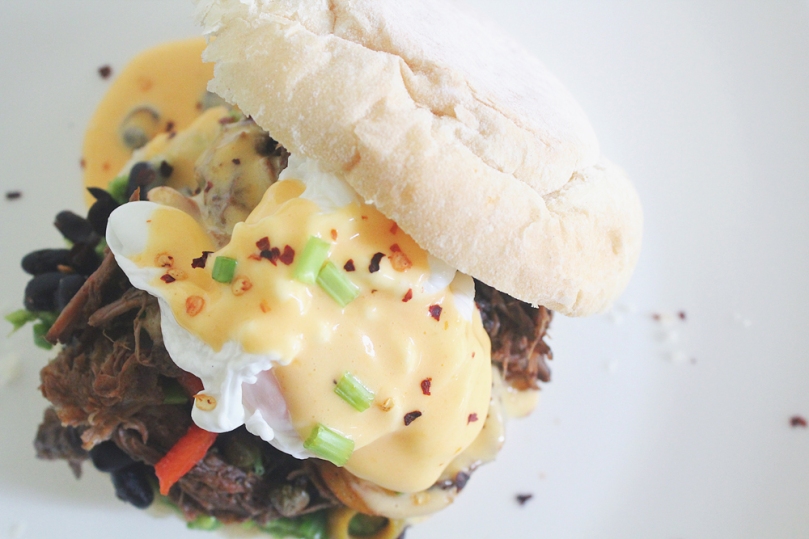 Next month I’ll start off with a whole new theme so stay tuned for that! To give you guys a clue, I’ll be switching up my upload schedule day to Mondays just for the month of June. Yes, the fact that I’ll be posting on Mondays does correlate to the theme! My loyal and long term followers may know, and to anyone who wants to take a stab and guess, comment down below!

Don’t forget that the overall theme for Amcarmen’s Kitchen for 2018 is Breakfast Eats!

But before that, I have one more recipe that will go up tomorrow night so stay tuned for that to know what else you can do with leftover Ropa Vieja!

Hello Everyone! So if you read last week’s post, you’ll know that tonight is part 1 of the actual recipe that I’ll be sharing tomorrow night. I’ve decided to split it up just for easy future reference, i.e. if you’re just looking for a mouth-watering Ropa Vieja recipe without it being in an Eggs Benny, then this is it! I first came across this dish during my university years in Australia. It wasn’t even the main highlight of the dish, rather a small side to go with the Colombian-style Arepas that was  my absolute favourite brunch dish then *drools just thinking about how much I miss having it in my tummy* It was a little place that Jialing had stumbled upon when she took the wrong bus to uni and got off at a stop that was just opposite Cafe con Leche.

Ropa Vieja is actually a Spanish term that directly translates to “old clothes” as the shredded beef and vegetables that are the main components of the dish resemble a heap of colorful rags. Though the dish dates back to the Middle Ages of Spanish Sephardi, it was then taken to Cuba where the Cubans made it their own. Ropa Vieja is now one of Cuba’s most popular and beloved dishes; in fact, so popular in fact that it is one of the country’s designated national dishes! It is also popular in other areas or parts of the Caribbean such as Puerto Rico and Panama.

The traditional method of braising the meat is in water. However, for this recipe, I am going to release all those flavourful beef juices directly into the sauce together with carrots, celery, bay leaves, onion, and garlic to get all the flavours of a stock going at the same time. This infuses the sauce with some umami-flavour qualities and natural sweetness from the vegetables, making everything of braising by this method super rich and mouth-watering. Do check out the original recipe by Kimberly from The Daring Gourmet.

Ignore the avocado, black beans, and the egg in the shot above, that’s for the Eggs Benedict recipe to follow tomorrow!

**The first time I made this dish, I omitted the dry white wine only because I didn’t have any on my pantry shelf at that moment. For those who are living in, or know about Brunei, it’s not as easy as popping over to the shops to buy a bottle. Anyway, I found that the flavours weren’t really brought out as much as when I attempted this dish for a second time with the wine. It felt flat like that pop or zing was missing from it. 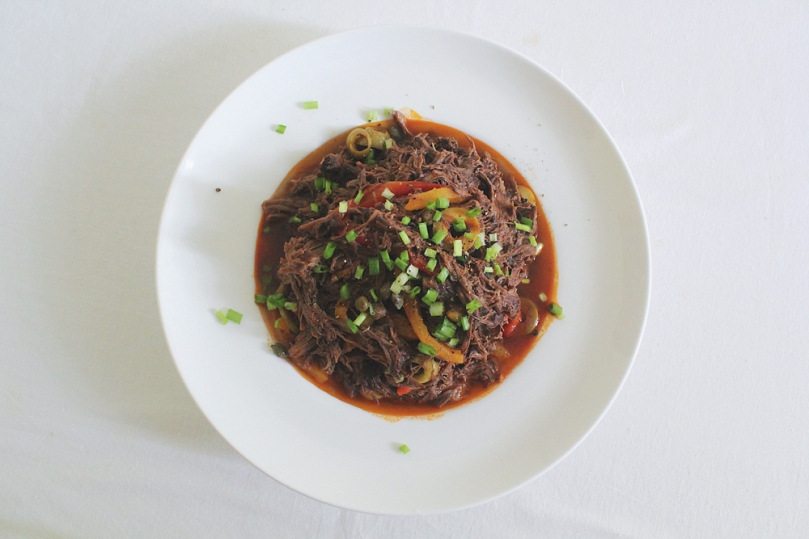 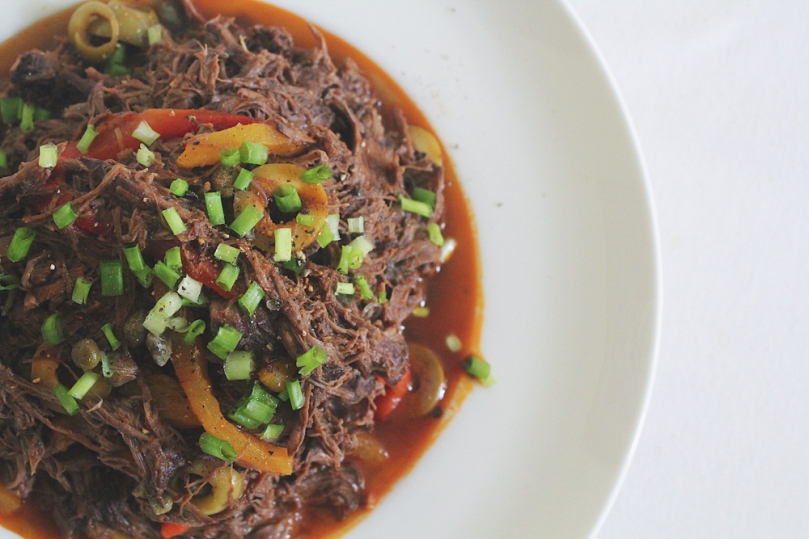 As per Kimberly, for a variation on traditional beef you can also use pork or chicken, bone-in/skin-on for the most flavour, or boneless breast or thighs. I might try this recipe out with succulent pork shoulders next time *already drooling*.