Hello Everyone! We’re packing our bags and venturing to Thailand on our Flavours of Southeast Asia journey! I don’t know if I’ve mentioned this in one of my previous posts before when I last shared a Thai recipe; I have and aunt who is Thai and I remember when we all used to live back in Brunei, she would teach me how to make Thai dishes such as Som Tam, Tom Yum, Yum Woon Sen, and many more. I’ve also visited Thailand a couple of times and have been to many Thai restaurants in Brunei and Australia.

The dish that I will be making today isn’t actually something I have tried for myself before. I came across it in a Thai cookbook that I purchased when I was still living in Brunei. It was during a work event, where within it we had something called the ‘Thailand Grand Fair’. If I remember clearly, they hosted a Som Tam making competition and had a guest chef come over as a judge and to promote his very first cookbook.

The name of his cookbook was very familiar to me, and then I realised that it was also the name of a Thai restaurant that I used to go to when I was still studying in Australia. Such a small world when I found out that he is actually the owner of it! I had the chance to talk to him a couple of times and I mentioned that I had been to his restaurant a couple of times – I even brought my mom and my sisters to eat there when they visited for my graduation. He was very humble and thankful when I told him that the food was great. 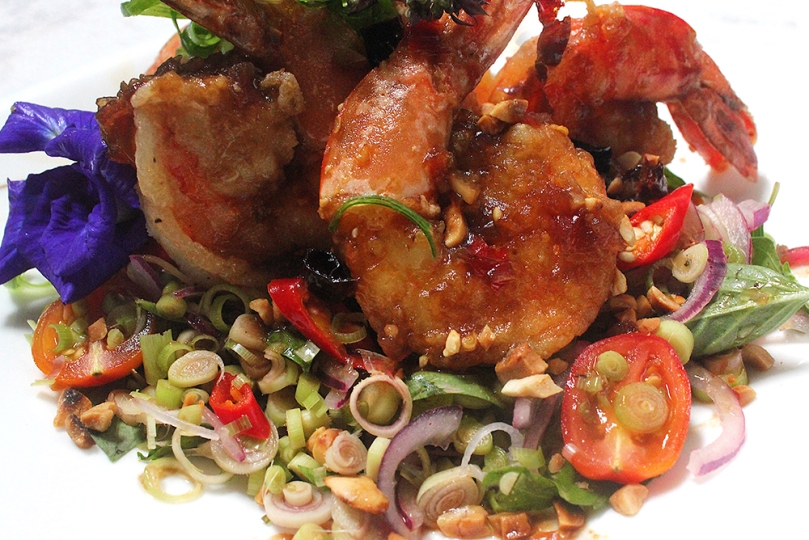 I was browsing through his cookbook one day for inspiration beyond the Thai recipes that I knew how to cook, which are also published on my blog by the way. A recipe for Spicy Lemongrass Salad (Yum Takrai) stood out to me, so did another recipe for Prawns with Tamarind Sauce (Goong Ma Kham), and thus we have a marriage of Crispy Tamarind Prawns with Lemongrass Salad that’s loosely adapted from Sujet Saenkham’s cookbook titled Spice I Am.

According to Chef Sujet, you want to take the time in slicing the lemongrass as thinly as you can otherwise it won’t be all that pleasant to eat. The fragrant and citrusy flavour of the lemongrass pairs very well with the prawns, or with any other seafood as a matter of fact. The tamarind sauce provides a nice balance of sweet, salty, and sour that is absorbed into the flesh of the crispy prawns when topped with it. Put all three together and you’ve got a match made in heaven of flavours and textures! In Chef Sujet’s cookbook, he mentioned that you can also use fish such as red snapper to pair with the lemongrass salad and/or tamarind sauce. I loved this recipe so much with the prawns so I’m definitely going to try this again with fish!

For the tamarind sauce

For the crispy prawns

For the spicy lemongrass salad