Sushi Bake is one of the latest gastronomic trends to pop up during the community quarantine period. It is basically a deconstructed version of the original Japanese rolled sushi; a quick and easy way to make in a large batch.

Hand making sushi rolls requires special skills to do, but this sushi bake recipe takes the hard work and time out of rolling each piece individually. With sushi bake, all you have to do is scoop a portion of it and wrap it in a small sheet of roasted seaweed, and then eat; making it a great option for larger parties or gatherings.

The basic ingredients you need to make this dish is sushi rice (or short/medium-grained rice), Japanese mayonnaise, cream cheese, sriracha for heat, ebiko (shrimp roe), Furikake, and your choice of seafood from salmon, to kani (imitation crab sticks), to tuna, or even unagi (eel). Furikake is a mixture of dry ingredients that is used as seasoning and sprinkled on top of cooked rice, fish, and vegetables. Since the sushi bake wave hit, it’s relatively easy to find Furikake in stores, online, or from small local businesses. If you can’t seem to find Furikake, then you can easily make it at home with roasted sesame seeds, Korean roasted seaweed flakes, salt, and sugar. 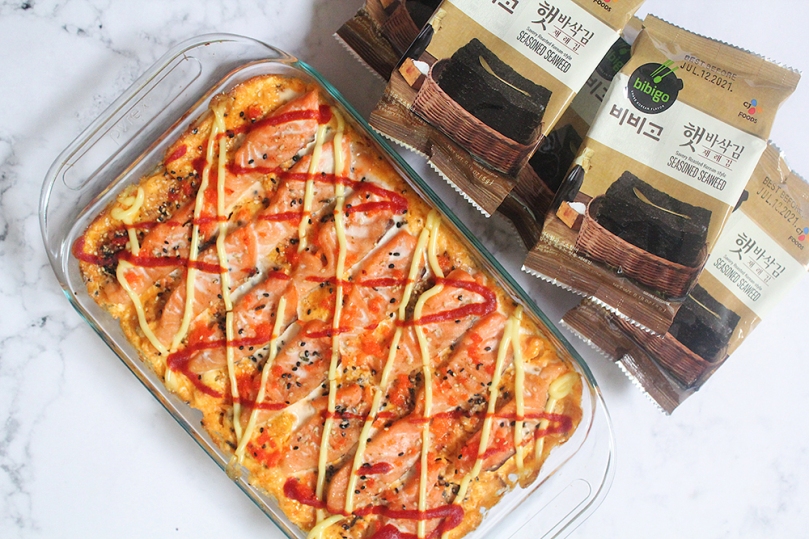 Being a person who doesn’t immediately hop on the trendy bandwagon, here is my take on it four months later. For the sushi bake that I will be sharing tonight, I decided to add a little twist to it since this month is all about cooking with or showing off the colour blue. I threw in some dried butterfly pea flowers into the rice cooker to give the sushi rice a blue (almost violet) hue. Thus, my Magic Salmon Sushi Bake!

I sourced my salmon, Furikake bonito, ebiko (shrimp roe), and roasted nori sheets from seabites.ph. They basically have all the sushi bake needs including mirin and Japanese mayonnaise that you can get as a kit. I just happen to have the latter already in my pantry as well as the other ingredients to support my dish. Bottom line, go and support small local businesses especially during this pandemic!

For the sushi rice

For the creamy topping

Hello Everyone! I’ve got a special post for you this evening as today marks 4 years of Amcarmen’s Kitchen! Don’t worry, I’ll still post a Breakfast Smoothie Bowl up for you guys most probably towards the end of the week since I already had the post and pictures prepared for it.

Anyway, technically I started this blog on April 16th, but it wasn’t until 2 days after on the 18th that I posted my very first recipe! You can check it out here: Cheesy Mushroom Omelette with Avocado Mint Greek Yoghurt & Wilted Spinach. Yes, you could say I was less talkative (wordy) for my first few posts, mainly because I had no clue on what else I could write about. When I started this blog out of pure procrastination way back in 2014 during my uni mid-semester break, I didn’t think I would be able to make it this far to be honest! I did slack behind a bit (a lot) towards the end of last year as it wasn’t easy juggling both a very demanding job, this blog, time for family and friends, and wanting some free time to myself as well. I have been doing a better job at keeping up so far, but it’s too early to tell to be honest, since I only just started getting back into this last month. 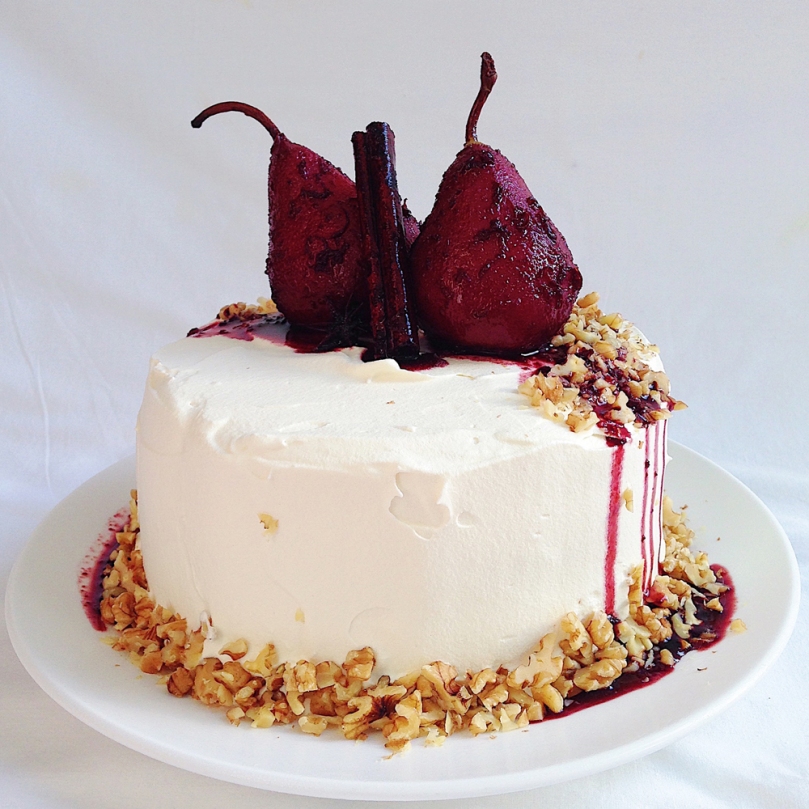 I want to say that I promise that I will try to do better this year, but even I know that that’s a promise that I won’t be able to keep, so bear with me my dear followers! I know it is not in any way an obligation for me to share with you guys every single week, but I feel a sense of accomplishment for when I do so, and I don’t ever want this blog to drift away. It’s the only passion that I have going on for me right now because of my busy work schedule, and I don’t want all the hard work I’ve put into this blog for the past now coming 4 years to just become all for nothing.

With that being said, tonight I will be sharing a recipe that I tackled last November actually… For my 26th birthday! I never got around to posting it, and since I literally just got back from Hong Kong last night and had to report straight to work this morning, I’ve had no time to bake a new cake to celebrate Amcarmen’s Kitchen turning 4. So here’s my Pear & Walnut Cake that I drew inspiration from Olivia over on Liv for Cake. The cake itself was moist, not too sweet and had a lovely texture from the soft pear chunks and crunchy toasted walnuts. The honey buttercream was light and fluffy, beautifully contrasted by the deep red pears sitting atop a white-frosted cake.

(Apologies for not having an ingredient shot like how I normally do for almost all my recipe posts, but the photo didn’t turn out so great so I just decided not to post it)

For the pear and walnut cake

For the honey Swiss meringue buttercream

Optional: for the spiced red wine poached pears to top

* Ensure that there are NO traces of egg yolks in your whites and that your mixer bowl and whisk is completely grease free or your meringue won’t stiffen.

** The buttercream may look like it’s curdled at some point. Keep mixing until it is completely smooth. 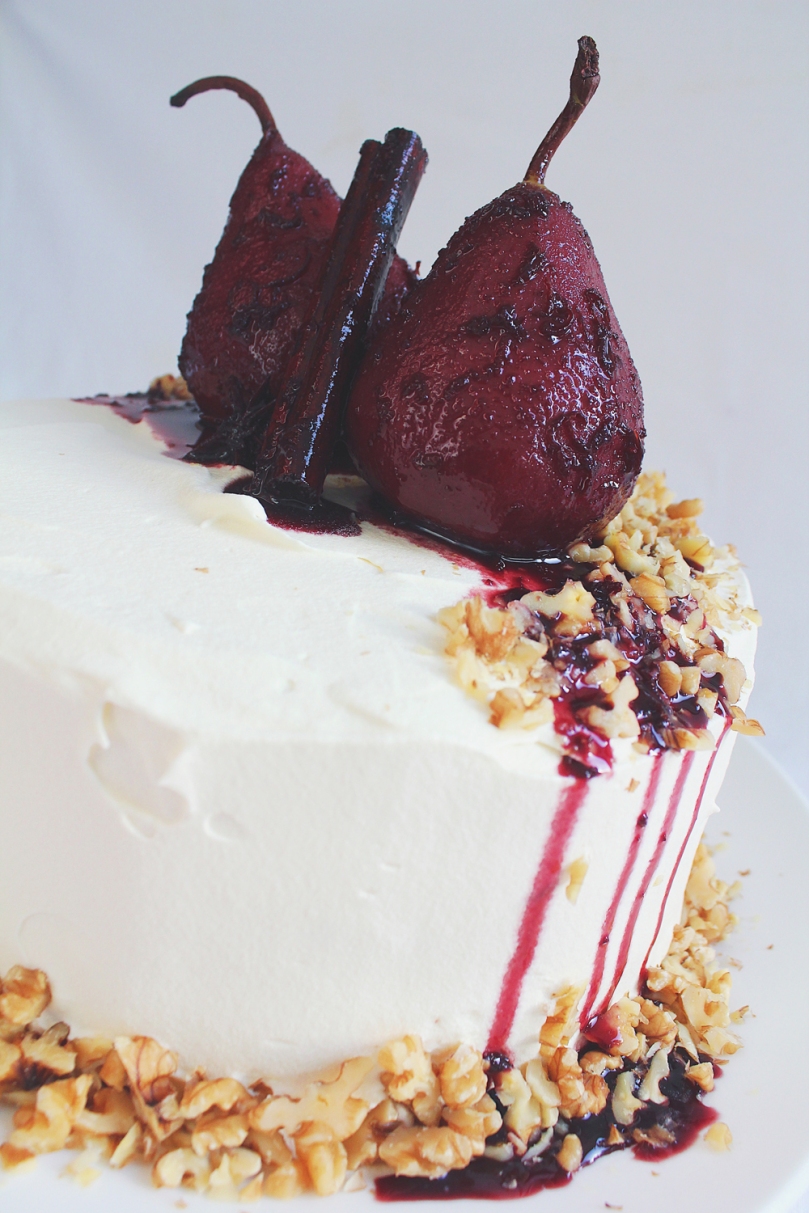