Hello Everyone and welcome back to our final Review Sunday for the year! Your read that right, and if you were able to catch my review last Sunday, you would’ve already known that I am stopping Review Sundays for a while. I have pretty much covered all the restaurants and cafés that I have visited over the past few months when I was in Sydney, and I have not been café hopping since I got back to Brunei. Instead of reviews on Sundays, I will be posting some of my design work on the blog.

All that aside, let’s get down to the review! So I’ve been wanting to go to this place for a very long time now and have had many opportunities to visit, but was always shot down for various reasons. The first time I tried to come here was for a brunch outing with Jialing and Yvonne. Yvonne was feeling under the weather at that time and said that she didn’t want to travel so far for brunch. The second time I tried to go there was with Jialing and her boyfriend for lunch; shot down again because he didn’t want to go to a place that has anything to do and/or supports Israel – just some firm beliefs and political issues he has with the country. So for my farewell brunch, I didn’t let anyone tell me otherwise because this would be the very last opportunity I’d have to go to this place. So how I came to know about SHUK was purely by just discovering eating places that I have never been to before. I came across a lot of places, but SHUK really spoke out to me, especially their Isralei Breakfast.

So yes, as mentioned above, I invited a few of my very close friends to come out and have brunch under the beautiful winter sun. Amongst the people who came out to see me were Annie, Daniel, Edison, Greta, Kevin, and Sophia. I know, you’re probably asking, where’s Jialing and Yvonne? Something happened the night before where Jialing couldn’t make it to brunch that morning. Yvonne technically had no excuse, but still ended up waking up late and therefore did not make it to brunch. I did however see her for a bit after brunch.

“The place is unstoppable. It’s Israeli by heart, Mediterranean on paper, Bondi by postcode and very Australian in its multicultural scope.” — Ryan O’Kane in GoodFood.

This café, bakery, and deli draws inspiration from the Hebrew term SHUK, which means marketplace. SHUK is North Bondi’s own marketplace where the freshest produce and dishes offered promises a flavour of Israel mixed with modern favourites for locals and tourists alike. Their menu is directly influenced by Arabic, Turkish, Middle Eastern, and Mediterranean cuisines, and of course is inspired by Israeli dishes that the owners of SHUK grew up with, sharing with us what they’ve learnt from their families back home.

If I ever have the chance to go back again, I would definitely order this dish. It looks like it would taste really good, I mean, of course it tasted good according to my friends who ordered it and didn’t share one bite (I forgive you Kevin). Edison was too far away from me to share, because I know he’d share 🙂 It is also a healthy vegetarian dish if you minus the chorizo add ons on the other dish!

This dish that Sophia ordered looked amazing, and even the combination of hummus and slow cooked lamb was hard to resist. On their menu you could have hummus and mushroom as another option, and I remember when Sophia ordered this, she asked our waitress, “I really like lamb, but I also like mushrooms, so I was wondering if I can have the hummus and lamb with mushrooms as well?” The waitress said she’d ask but by the looks of the photograph, I don’t think she got her mushrooms. Anyway, I had a bit of her dish and it was delicious. The lamb was tender and juicy, and the hummus complimented it well. I can’t remember if it was from her dish, or Kevin’s, but I remembered eating the olives from someones dish because they didn’t like it.

This was the dish that I ordered. To be honest, even though it look spectacular in front of me, served in a massive pan with little bowls of everything, that was all it was. Don’t get me wrong, it was a bad dish, it’s just that he flavours and everything were average and nothing really blew my socks off. Also, when I got the dish, I felt like something was missing; I had all these spreads but no bread to put it on, so I had to call a waiter and ask for some toast for my dish. I still liked this dish; I only wished it impressed me more. 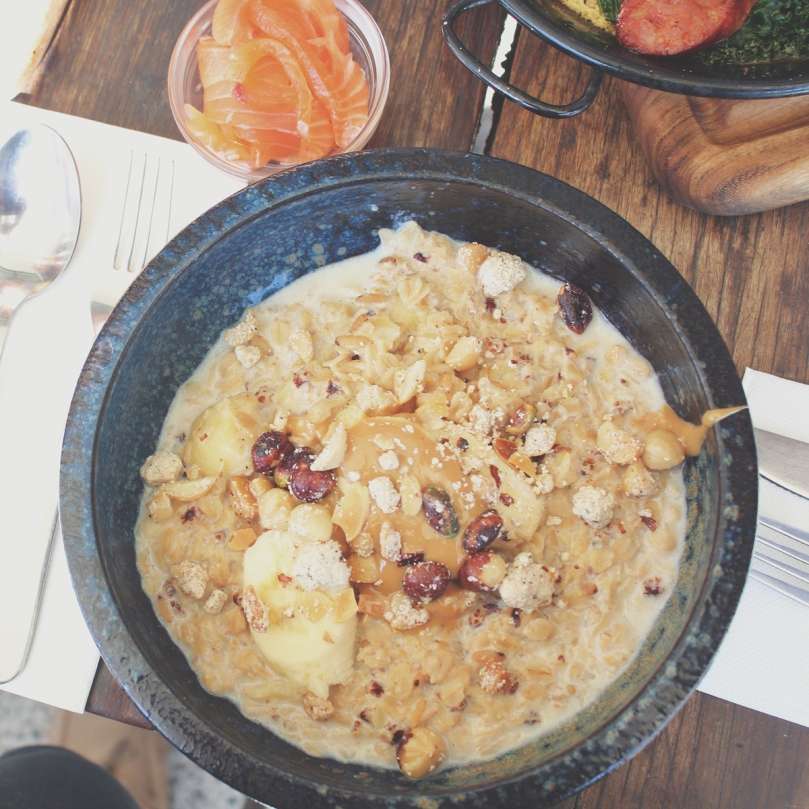 Now I know Daniel to be quite health conscious, so it was no surprise that he’d go for this dish (well except for the fact that it has dulce de leche in it). Daniel was sitting across the table from me so it was hard to want to try a little bit of his dish. From where I was sitting though, he seemed to enjoy his porridge, but I think he was a little bit upset by the fact that he ordered some smoked salmon on the side. Why was he upset? The side was priced at $4.00, and he got a puny bowl of it. 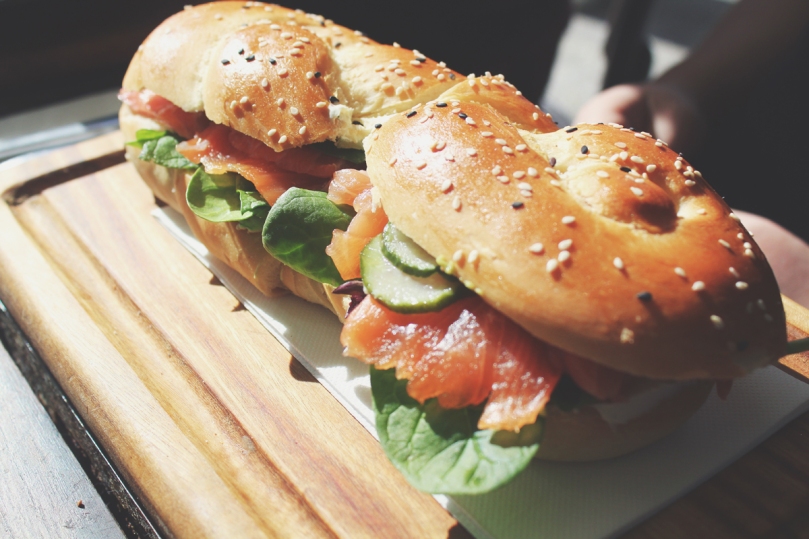 I’m surprised that even though Greta sat next to me, I didn’t get to try her roll at all, well only because it’s kind of hard to bite into someones sandwich I guess. I did ask her how her dish was and she said it was very good. She had actually been thinking of going to SHUK for some time as well and thanked me for choosing this place as it then gave her to opportunity to. 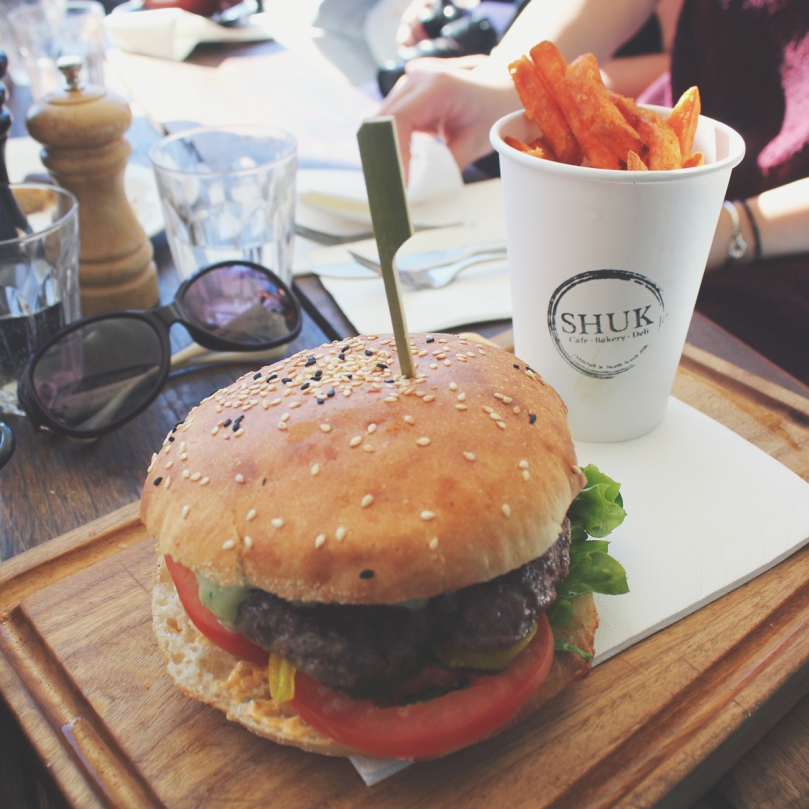 I’m sorry but I completely forgot what this dish was – it was on their specials menu which meant that it wasn’t listed out on their regular menu. A little back story here, so one of my friends, Annie, who came late to the brunch, went inside the café and ordered this dish. When he dish came out, she told us that it was one of the specials that they had for that week. We never asked the waitress who served our table what the specials were, and frankly she didn’t think to mention it to us as well, so I guess it’s no one’s fault. Also, because of that, I didn’t know what dish she ordered, nor did I remember to ask her what dish she ordered. I think she mentioned it, but it’s been more than a month since I was at SHUK, so it has already slipped my mind. So I did have a bite of the burger, I believe it was beef, and one too many sweet potato fries *cheeky grin* The fries, to die for, and the burger patty was tender and juicy.

Overall, I’m actually quite impressed with the food served up at my farewell brunch. It was actually quite a packed Saturday morning when I got there, but I was able to snag a table within 5 minutes of arriving. I’m just glad that they didn’t kick me out of the table because I had to wait a good half hour for the next three people to arrive, and an hour for the rest to come. We basically had the table for an hour before we even started ordering… Oops! Besides that, they can accommodate quite a lot of people in their restaurant, both indoors and outdoors. The service was pretty good, the waiters and waitresses who served our table were quick with requests and food came out very quickly too I might add. I’d give ambience/environment and service a clear 8/10 for our experience that day. I must say that I was quite surprised that the food served was fairly priced, though I’m not sure if I’d pay $21.00 for the Israeli Breakfast, but other than that, the other dishes definitely looked like you got your money’s worth; 8/10. The food looked amazing and some impressed more than others; 8/10.

SHUK is open everyday for breakfast and lunch, and dinners on Friday and Saturday night until 10pm. If I ever find myself in Sydney again, I would definitely hit this place up again and try dishes from their lunch and dinner menu as they look very enticing. As to quote Greta on that day, “you should just keep coming back and leaving so that we’ll have endless farewells.” Thank you Greta! 🙂