Hello Everyone! 2016 is coming to a close real soon and I would just like to take this opportunity to be thankful for what the past year has brought, not only for me, but for my family and my friends as well. Inevitably, life if not always perfect, it has its ups and downs, and for all the times where I felt down or put down but others, I can only say that – as cliché as this sounds – it has made me become a stronger person. I have been thrown under the bus countless of times by people around me and have had people say bad things about me behind my back – to all these people, you can go shove it where the sun don’t shine. You’ve made me realise how easy it can be for me to just shut you out because I don’t need that kind of toxicity in my life. Arrivederci.

Well, that escalated quickly haha! From being thankful to talking about the poisonous people is my life. Anyway, this will be the last recipe that I will be sharing on Amcarmen’s Kitchen for the year 2016. I hope that all my family, friends, and followers have had a good read and have cooked up a storm in their own kitchens with my recipes. Don’t forget to use the hashtag #amcarmensrecipes when you create a dish from my blog so I can share them on all my social media mediums. I will be back in February with a whole new concept to my recipes so please stay tuned! Yes, I will be taking a break in January as I have quite a full plate with work for the month and I might be able to spend time in the kitchen. I will also be planning content for Amcarmen’s Kitchen during my time off to ensure that everything runs smoothly for the upcoming year! Look out though for a post coming in mid-January as an introduction and hint to the recipes ahead for 2017!

Since Christmas passed not to long ago, I decided whip up these tasty raw vegan gingerbread balls as part of my ball-balls theme for December to keep with the Christmas-spirit.The only slight change I made to this recipe was replacing the buckwheat groats with more almonds just because I have no clue where to find buckwheat groats here in Brunei! Before we jump into the recipe for tonight, please check out the original recipe from Amanda over on Rawmanda.

Hello Everyone! Before I begin, I would like to check in with everyone and see if you all were able to guess the theme for this month. I’m pretty sure that by this post, you’ll have an idea of a recurring theme, but nevertheless, I will share it with you guys right here, right now! Drumroll please!

BALL BALLS! Yes, you read that right, ball balls, and here is a little back story to the name – so there was one day, back when I was still living in Australia for my university studies, my then roommate and I were talking about Christmas I guess, well I actually don’t remember the root of our conversation but it was more like I misunderstood, or I didn’t quite hear the pronunciation of the word “baubles” when my roommate had said it. At that time, I assumed that she said “ball balls” and that, that was what those round Christmas ornaments were called. Fast forward to another time, I was correct by someone (sorry I can’t remember who) that it was actually baubles and not ball balls. I was so disappointed at the time because I thought ball balls was such an epic name to call these Christmas ornament. Just recently, and when I say recently I mean like about a year ago or so, Jialing shared with me a folder name in their office server and it was titled BALL BALLS, to which I replied to her “SEE I TOLD YOU THEY ARE CALLED BALL BALLS!” I was just overly excited at the fact that I wasn’t the only dumb one to call them ball balls.

Jialing has been quite helpful this year in a way that she has helped me with some blog themes for this year. At first, she asked me what the theme of my blog would be for the month of December, and we both came up with the idea of doing ball-shaped food as we recalled our “ball balls” story. So, as I do not have a backstory for this particular recipe since I just came across it while browsing through Pinterest, I will just get right in to the recipe. Before you do, check out the original recipe by Erin over on The Almond Eater.

“Add a spicy kick to meatless meatballs with these vegan Buffalo Cauliflower Quinoa Meatballs. With simple ingredients, like cauliflower, quinoa, garlic, and breadcrumbs, they’re sure to be a hit for the whole family!” — Erin, The Almond Eater.

For the cauliflower quinoa ‘meatballs’

For the buffalo sauce

For the blue cheese-yoghurt dip 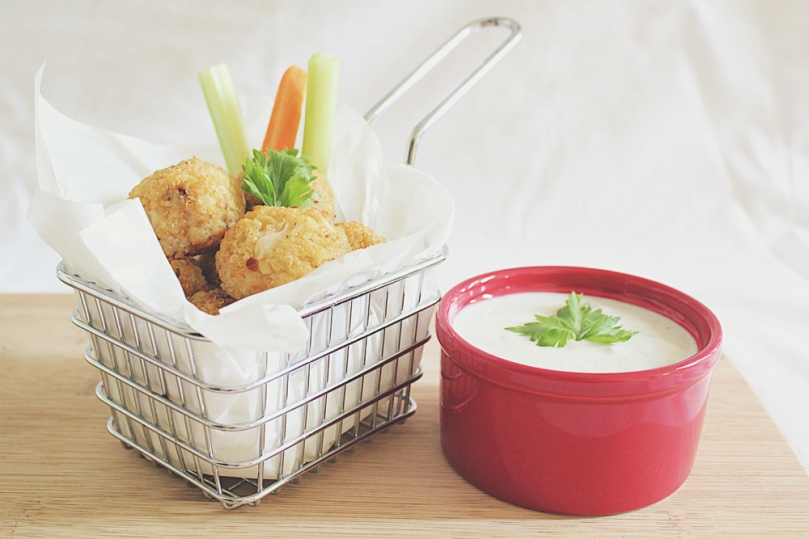 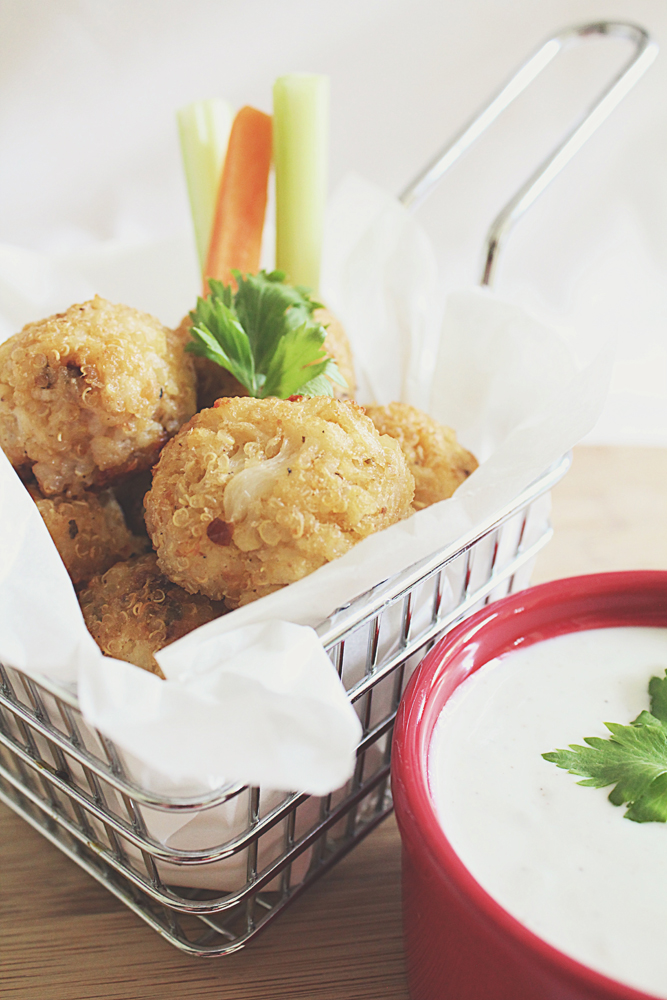 Hello Everyone! Hopefully tonight’s recipe will be able to get your brains going to have a guess on what the theme for December on Amcarmen’s Kitchen is. Like I said in the previous post, it may be obvious to some after this, or maybe you’ll have to wait until next week to make the connections. My best friend Jialing actually planted the idea in my head, and when I came up with the final theme, even she was excited to know that I’d be doing this for December. I’ll give you guys a slight clue – it definitely is Christmas-related. 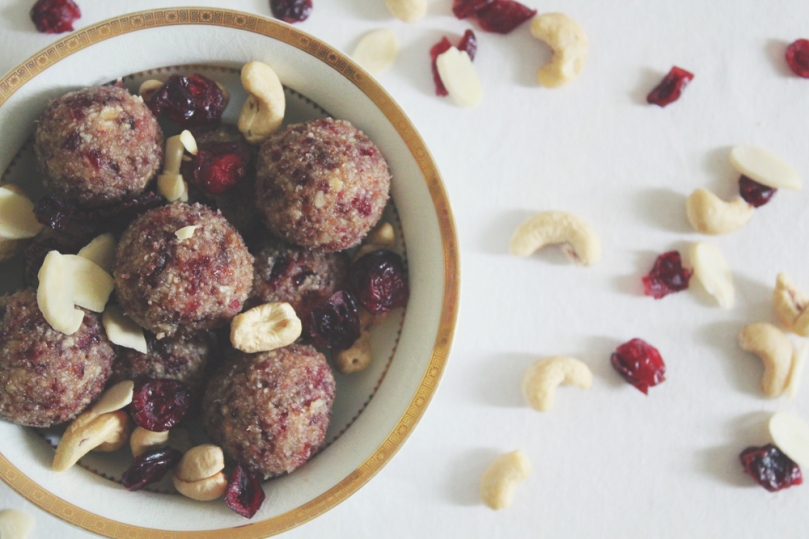 Anyway, I’m going to keep tonight’s post short and only because I don’t have a long-winded back story to tell about who I came across these energy bites in the past and here I am having a go at my own version – because that isn’t the case here. I merely just browsed the World Wide Web in search for recipes that I could try out specifically for this month’s theme. I came across this recipe on Pinterest a while back, and I thought I’d give this one a go seeing as it is simple (that’s right, only 5 ingredients!) to make and deliciously energising indeed! Just a heads up, they may be a bit too sweet for some who are intolerant to anything sweet because of the dates, but nonetheless, they are pretty darn good! Check out the original recipe by Danae over on Recipe Runner.