Hello Everyone! Once again, time really has flown by! I can’t believe that it’s already the end of March and we’re already a quarter into the year. I wish I could say the same for each passing day I spend in the office. It was only just recently where I started to feel that everyday is like a Monday, and that weekends do not exist – even Sunday does not feel like a Sunday anymore. Everyday is Monday. Haha, I’m so pessimistic; but no, seriously, just last week I was convinced that the afternoon of Wednesday was already Thursday, and that the next day would be Friday. I was rushing to get all my work done that was due for Friday, only to realise a little later that is was still only Wednesday. Sigh. I think I briefly mentioned this is last week’s post too – yes, still not over it haha!

Anyway rant aside! Nothing exciting has happened since my post last week besides the night that we (my colleagues and I) went wax (yes, not ice) skating. I was a bit sad to find out that the rink was not actually ice, but I was also slightly a little bit relieved because I find it easier to skate on wax than ice. I nearly made a no-fall record for myself, until my colleague Grace dragged me down with her. Other than wax skating, I managed to complete my meat free week that ended on Easter Sunday! This weekend I’ll be hanging out with some of my high school buddies whom I have not seen in forever! We’ll be watching Belle the Musical (Beauty & The Beast), but as usual, before the weekend comes it’s going to be all about work work work work work.

Happy days are here as sweet Philippine mangoes are finally in season! And because of that, I cannot resist a refreshingly delicious tropical smoothie that just screams Summer is here! Mangoes alone tastes so good, and that is one of the reasons why people often forget that mangoes are actually quite beneficial to our health, however, there are a few cautions to take into consideration especially if you have some allergies that can cause a reaction to consuming mangoes. First of all, research has shown that antioxidant compounds in a mango fruit has been found to protect against colon, breast, leukaemia, and prostate cancers. Other than that, mangoes contain high levels of fibre which helps to lower cholesterol levels.

This particular health benefit caught my attention, and it’s that mangoes helps in diabetes. I would think that it would spike sugar levels because of it’s insane sweetness, but apparently the fruit has a relatively low glycemic index (41-60) so moderate quantities will not increase sugar levels. The mango leaves though, help normalise insulin levels in the blood.  The traditional home remedy involves boiling leaves in water, soaking through the night and then consuming the filtered decoction in the morning.  To read up more on the health benefits of mangoes, click here.

Now as mentioned, there are some cautions to look out for when consuming mangoes: 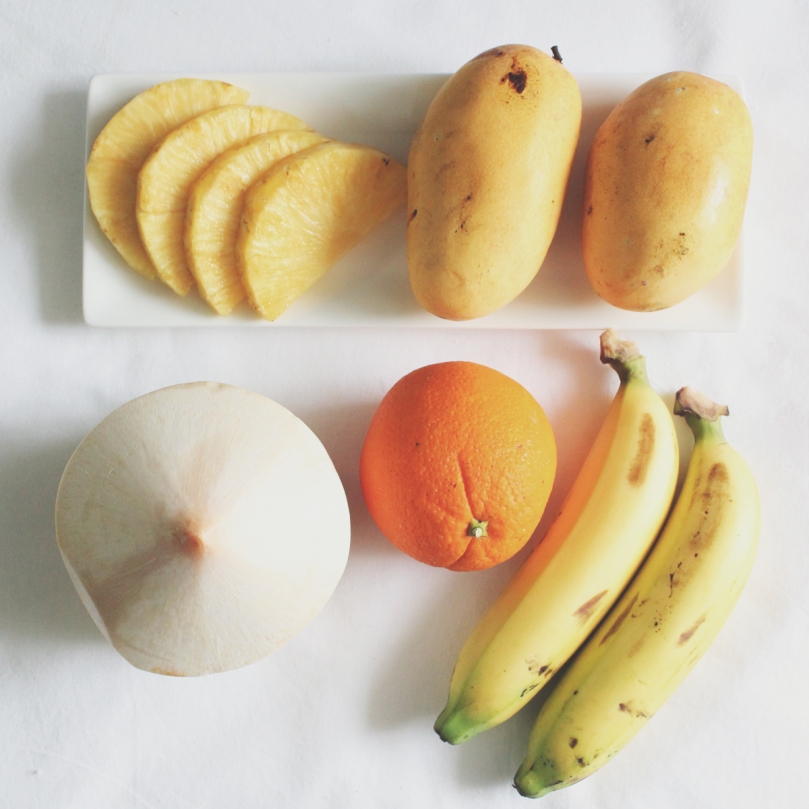 Hello Everyone! It’s Week 4 of Smoothie month and tonight I’ve got a very simple recipe yet packed with lots of flavour and nutrients. I don’t actually have much to share with you guys besides the fact that it has been a long week of work. I actually genuinely thought that today was Thursday, and then to my dismay, it’s only Wednesday – I was so looking forward to being one step closer to my 1-day weekend!

Besides my life being non-exciting for the past week, on Monday I started my Meat Free Week in preparation for Easter. So far, it’s going well and I can definitely say that I am in a much better place than where I was two years ago with this. Two years ago I was always hungry and depressed for being always hungry. I lasted the whole week but despised the rollercoaster of emotions that I experienced. Last year, I did not last 3 days I think – I needed my meat. This time around, I’ve completed 3 days without meat, but I have to say, yesterday I had such intense cravings for deep fried crispy chicken – and to my dear friend Pam, saying round 2 to Korean Fried Chicken did not help me get over my cravings that day! Haha.

Anyway, tomorrow will be a bit more exciting I guess. After work I’ll be having dinner with my Marketing colleagues and then heading off to do some ice-skating! Oh gosh, what have I gotten myself into. Firstly, I may have mentioned this in a previous blog post before, and I can’t skate to save my life! The last time I went ice-skating, I fell hard on my bum 7 times in a span of a 2-hour skating session. Secondly, I managed to slice my pinky finger on someone else’s skates as I was going down for my last fall of the day. It was a small cut, but the scar is still visible *sad face*

Moving on, if you’re not already a fan of strawberries, you should be. Not only are they juicy, summery and delicious, they’re a bona fide superfood, too. Nutrient-rich and packed with antioxidants (like vitamin C), strawberries offer a wide range of health benefits. Strawberries boost your immunity, promote eye health, help fight cancer and bad cholesterol, reduce inflammation, regulate blood pressure, boost fibre, aid in weight management, and result in healthier, younger-looking skin. To read each health benefit in more detail, head on over to Reader’s Digest Best Health. Likewise, bananas too contain many important nutrients and powerful antioxidants that help support heart health, improve digestive health, moderate blood sugar levels, and many more. You can read more on the health benefits of bananas here. 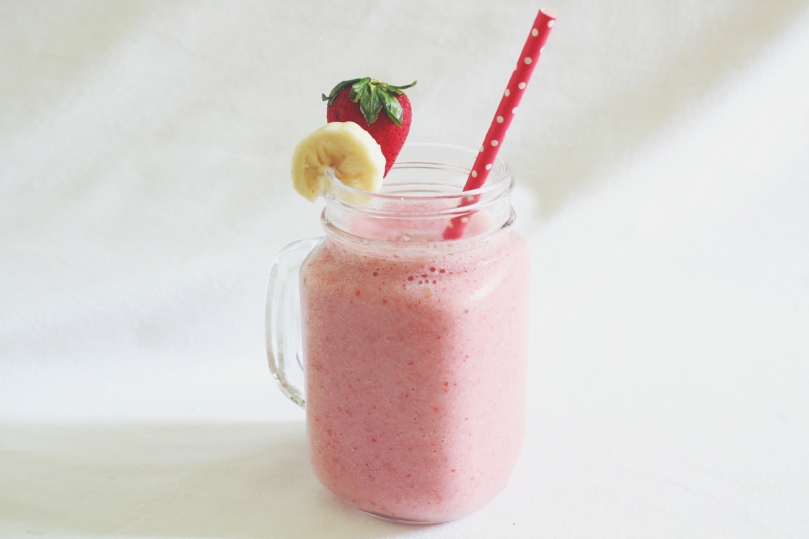 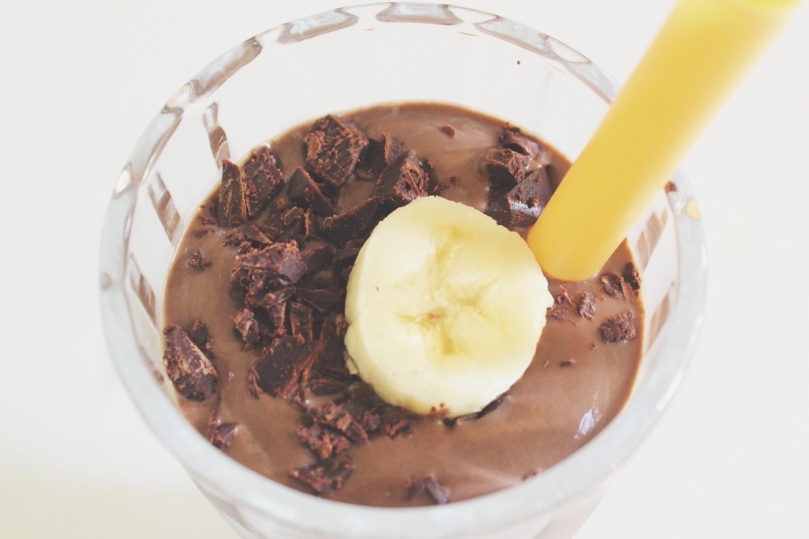 Hello Everyone! It’s week 3 of deliciously healthy smoothies to kickstart your mornings, boost your afternoons, or fuel your post-gym workouts. Well, tonight’s smoothie is a little less healthy in comparison to the two that I’ve posted since the month started – and I say this just because I’m using full cream milk in the recipe. I’ve opted for the light yoghurt though if that makes any difference! *cheeky grin* Anyway, this recipe was inspired by a smoothie that I had probably over a year ago or two now back when I was brunching my way through Sydney with friends. I had this smoothie (or something similarly along the lines of this smoothie) at a café called Rustic Pearl. When I saw this on their menu, the reaction ew came to mind followed with mixed emotions. Nonetheless, I decided to be adventurous and instead of going with a conventional banana and cinnamon smoothie, I ordered the Chocomolé (Chocolate & Guacamole) – may I just add what a creative name to call the smoothie! This was the best decision that I made that day. The smoothie was an absolute yum!

Anyway, don’t forget to check out the original recipe over on Texanerin Baking. There are options for vegan, diary-free, and paleo as well, where you can basically switch out the Greek yoghurt with coconut milk yoghurt, and completely omit the use of full cream milk as well or replace it with coconut milk. Though it was delicious for me, it might not be to everyone’s liking for I think my Mom didn’t like it when I made this batch a couple of weeks ago for the first time haha. 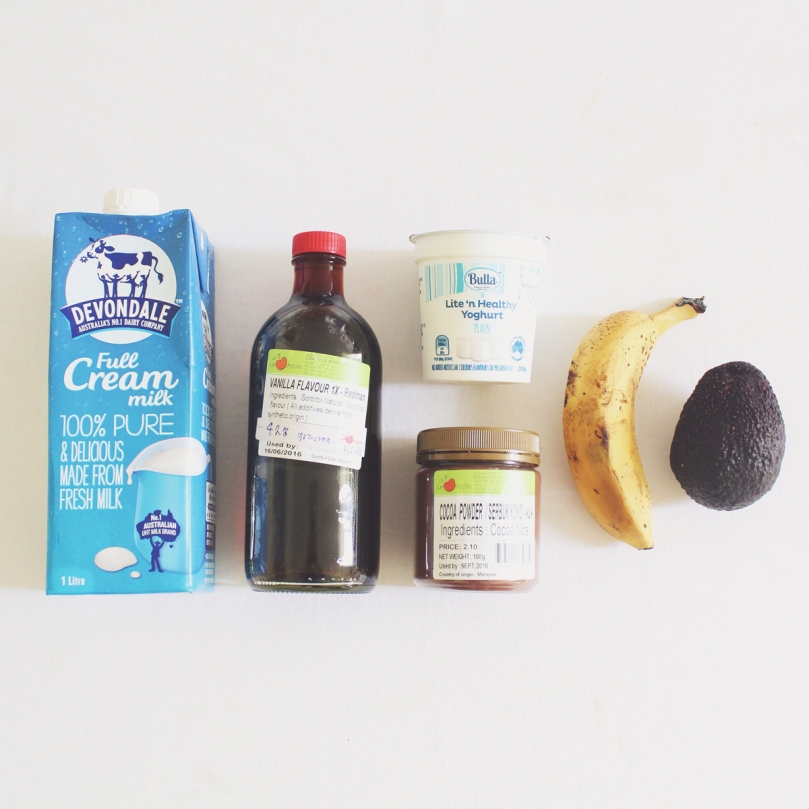 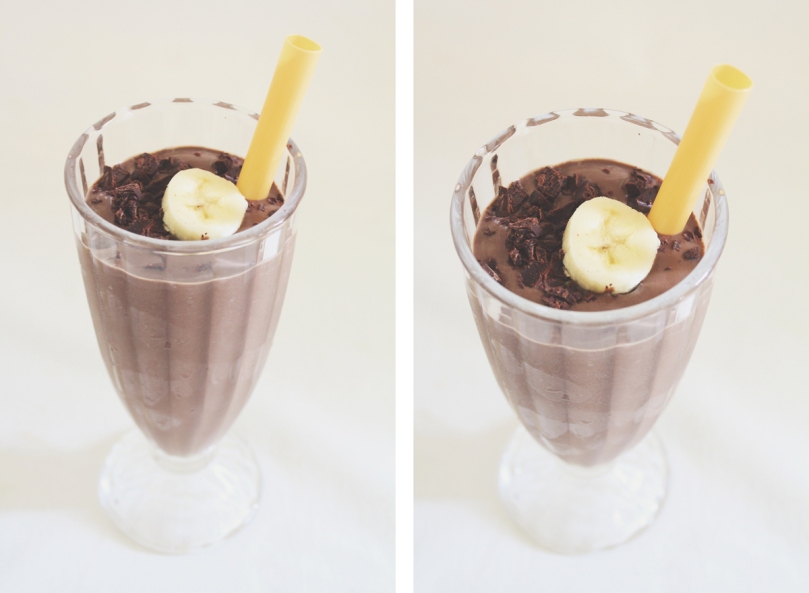 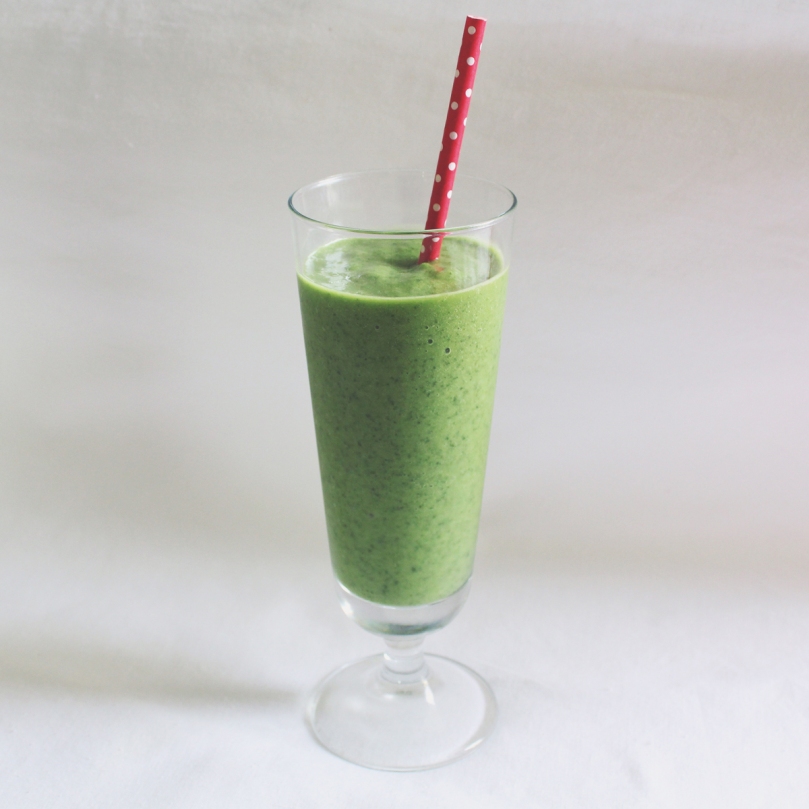 Hello Everyone! So last week was a little hectic, and today is no different as well. I’m currently back in Brunei; I arrived at 4 in the afternoon, and tomorrow I’ll be back in office – sad times. I had a great week in Singapore, though I wouldn’t call it a rest and relaxation kind of holiday. I was out and about most of the time, exploring, café hopping, eating, playing with dogs, and many more activities which included the shedding of calories for my wallet. Anyway, so from my previous post I mentioned that I was going to go to the River Safari with my sister – and we did! It was a lot of fun seeing a lot of aquatic animals, especially Kai Kai and Jia Jia the Giant Pandas!

The following day, Pam, my sister, and myself started our morning at a café known as Boufé. The food was delicious and it reminded me so much of the brunches that I had when I was back in Sydney. I’m really sad that Brunei doesn’t have that kind of brunch that I’m after – or maybe there is, it’s just that I haven’t had the time to explore the new/existing cafés in Brunei. Anyway, after that we headed straight for the Dog Café (also known as We are The Furballs or WTF) to play with the cutest dogs ever! If you want to see photos of this, you can head on over to my personal Instagram account, @amcarmen.

After the weekend, things slowed down a little bit as I did most of the shoppings that I needed to do, and went to the places that I had planned on going to. The only last thing that I did was co-host a dinner party with a high school friend for our other high school friends, one of which I had not seen since we finished IB and headed of for university (which was 5 years ago!). One of our friends is a vegan so, my friend, Miao, and I took up the challenge to whip up some yummy vegan dishes. Both of us had never cooked up a vegan dish before so we were both quite excited to see how it would turn out. I remember at one point when Miao was making her Spiced Cauliflower Soup, she tasted it and didn’t seem like she was blown away with it. She then asked me to taste it, and as I was tasting it, she said:

“Something’s missing, but I don’t know what. I don’t think it needs anymore herbs because I think it’s quite balanced already… Or maybe it’s because it’s vegan?”

I laughed out loud at that comment! Maybe it was just because it’s lacking a lovely chicken broth base or oils from fried up bacon as its base – but nonetheless, the soup was still pretty amazing. Good job Miao! For mains, I cooked up a Chunky Butternut Squash Wholegrain Spaghetti with Sundried Tomatoes and Sage Leaves. Again, we had a hefty laugh at the table when Ann (our vegan friend), filled her plate with the pasta, sundried tomatoes, and sage leaves. She then started to mix it and was about to take a bite until Miao’s boyfriend, Robin, pointed out that she was missing the Butternut Squash sauce. We laughed out because she thought that it was some sort of agilo olio. It was funny, but I guess you’d have to be there to understand the extent of the humour. Lastly, we ended the savoury with a delicious No-bake Blueberry and Orange “Cheesecake”.

Okay, I apologise for a super long post, so I guess I will keep this part short. I think I may have added too much kale, or not enough pineapple because the kale was really overpowering the taste of the smoothie. Kale has a lot of vitamins and also contains powerful antioxidants that help protect your immune system and fight against certain cancers. If you want to read more about the health benefits of kale, please click here. Now, you may substitute kale for spinach if kale isn’t readily available where you are; I know that it’s not very cheap to get kale here in Brunei since it’s air-flown in from Australia. Before you scroll down to the recipe, don’t forget to check out the original over on Delicious by Dre. 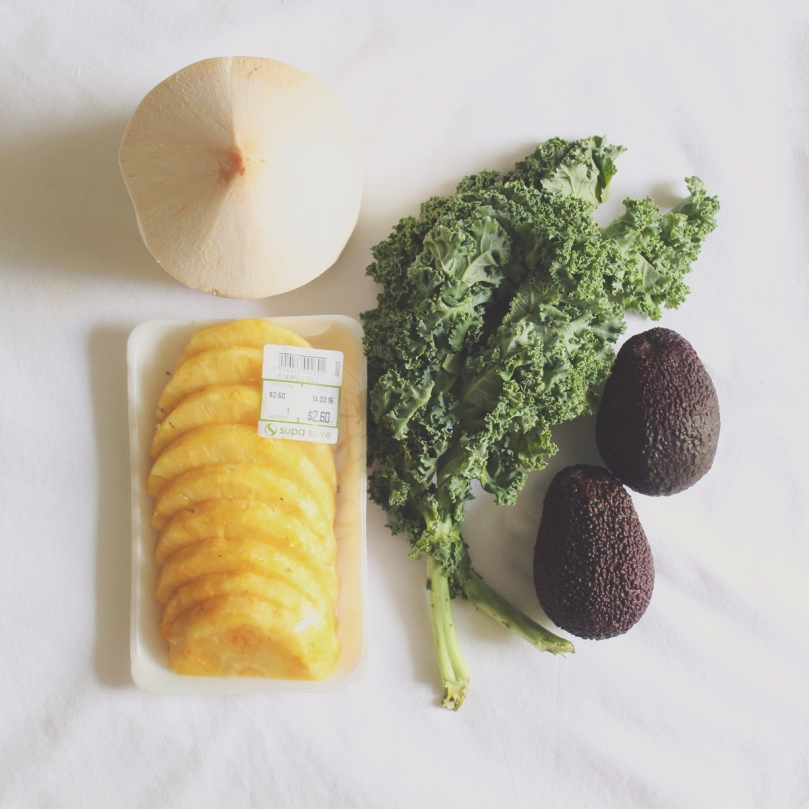