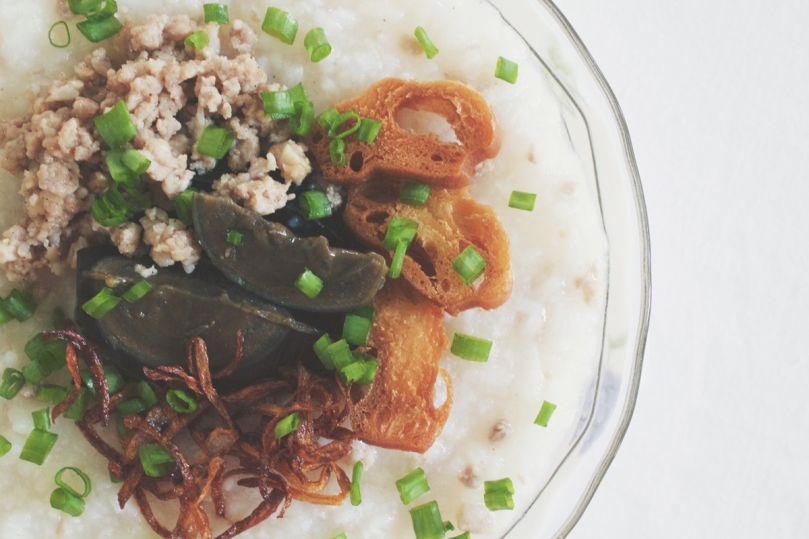 Hello Everyone! So continuing on with the idea of porridge from Tuesday’s post, I decided to whip up a classic congee dish. The origins of congee are unknown, but several historical accounts have shown that this dish was served during times of famine as a way to stretch the rice supply in order to feed more people. Despite that, congee is one of the traditional Chinese foods that has a history dating back to thousands of years in China. It is now a largely popular dish in many Asian countries and though it has many variations, its base is usually a thick porridge of rice that has been cooked in water or stock for a prolonged time. When it is eaten as a plain rice congee, you often eat it with other side dishes, but when additional ingredients such as meat and other flavourings are added, it can be a meal on its own. Depending on your cultural background, congee is eaten as a substitute for rice, but is known to be primarily eaten for breakfast or late supper. It is also considered suitable for young children or for those who are ill as it is a mild and easily digestible dish.

Now before I go on to the recipe, I thought I’d talk a little bit about what a century egg is. For those of you who don’t know, century egg (also know as a preserved egg), is a Chinese delicacy traditionally made by preserving duck, chicken, or quail eggs, in a mixture of clay, ash, salt, quicklime, and rice hulls for several weeks, or even months. Through this process, the yolk turns dark green to grey in colour, acquiring a creamy consistency and a strong flavour. On the other hand, the egg white becomes jelly-like and translucent, dark brown in colour, and salty in flavour. I know what you’re thinking, sounds disgusting right? I’ll be honest with you, it took me a while to be able to get over its looks and smell. I still don’t love it, but it’s definitely good with congee! To prepare these eggs for the congee, you simply just have to wash off the mixture of clay, ash, salt, quicklime, and rice hulls that cover the egg. I recommend washing it outside as to not clog your sink with all the residue. Tap the eggs on a countertop until covered in cracks, and then peel the shell off. 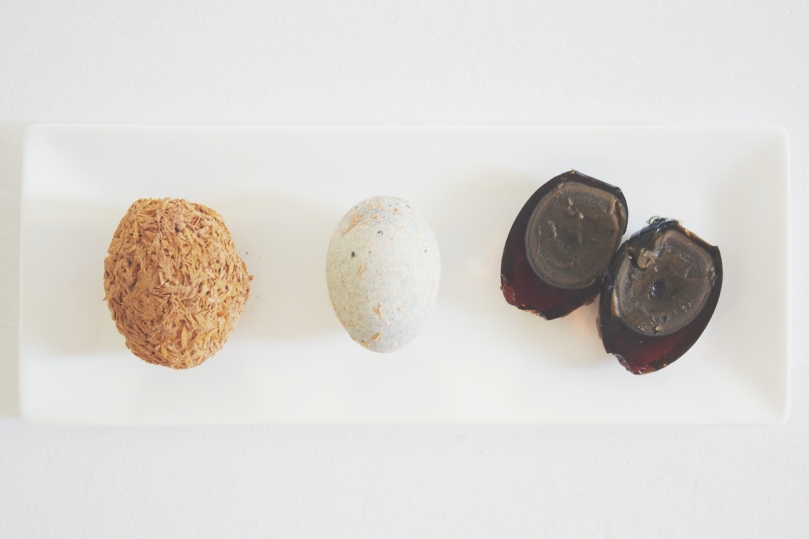 As mentioned before, there are many variations in which you can have your congee; plain or dressed up with your favourite ingredients – it’s all up to you really! At breakfast/brunch buffets (that’s when I usually indulge in some yummy congee), you’re given a selection of toppings to accompany your plain congee. I usually go for the whole works which included century egg, fried cha kueh (deep fried dough), crispy fried shallots, spring onion, and some sesame oil.

*You can also start with cooked rice, adding chicken broth and adjusting the amount of liquid to achieve the desired consistency. Make sure that when the rice has swelled, mash it a bit to help it break down.

**Cha Kueh (You Cha Kueh) is a Chinese deep-fried dough that is chewy yet crispy; a delicious snack that is normally paired with coffee or tea in the mornings or afternoons. There is a certain level of skill and expertise needed to knead the dough to the right consistency, as well as deep-frying techniques, to make the perfect cha kueh. So, if you want, you can make your own cha kueh, or if it’s readily available in stores nearby, then you can just buy it already cooked. I guess croutons can also substitute if both are not an option for you, or you can leave this element out completely. I like to include it in my congee for an added texture of crunch.