Hello Everyone! We’re kicking off the Year on Amcarmen’s Kitchen, and for the month of February, with sumptuous recipes that pays tribute to one of the most popular health foods on Earth. Known, as the Banana, the curved yellow fruit is one of the most widely consumed fruits in the world for good reason. Other than its ability to aid in regulating blood pressure due to the amount of potassium present in bananas, they are also known for helping with asthma, reducing the risk of developing childhood leukemia and help combat cancer, reducing the risk of cardiovascular disease, lower blood glucose levels and improve blood sugar, and many more health benefits that can be found over on Medical News Today.

I stumbled upon tonight’s recipe while I was browsing through Pinterest, in search for creative and innovative recipes to test out myself for the upcoming year for Amcarmen’s Kitchen. What initially attracted me to this recipe is the idea of adding chai tea leaves to an already delicious Banana & Cinnamon Smoothie. The original recipe can be found over on Gimme Some Oven, where the author Ali talked about why choose between having tea or a smoothie when you can have both? A brilliant idea by the way as my Banana & Cinnamon Smoothie definitely amped up in taste and flavour with the addition of Spicy Chai tea leaves from Twinings. Our local grocers didn’t have regular chai tea so I had to go for the spicy chai – nonetheless it was just as flavoursome as regular chai with an added kick to it to really boost the overall taste of the smoothie. I’m definitely keeping this recipe up my sleeve whenever I feel like a hit of protein to my breakfast/brunch mornings.

Note: Feel free to make this smoothie completely vegan-friendly by substituting the milk out for almond milk and omitting the plain yoghurt out by adding an extra quarter cup of almond milk. 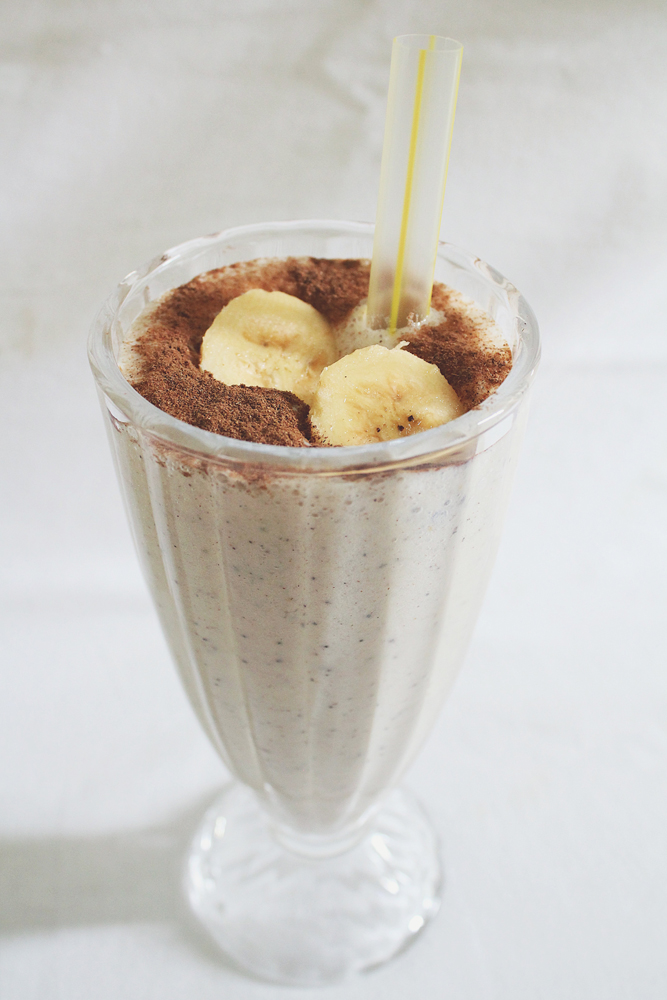