Hello Everyone! The kangaroo makes another appearance on tonight’s blog post! I finally got around to using the other half of the kangaroo mince that I first cooked with about a month or more ago now. I decided to go with making a lasagne only because I had most of the essential ingredients already in my fridge/pantry at the time I was planning on making it – I really only needed the lasagne sheets and a few of the vegetables.

Tonight’s post is not going to be as long as the others; I don’t have much to tell. If you read my post on the Kangaroo Bolognese that I made a while back, you’d know the story behind how I came to purchase roo mince. Also, I mentioned in that post that I neither loved nor hated the taste of kangaroo – it was just an inexplainable feeling. I even said that, after having given kangaroo a second chance while camping in Uluru, I was leaning more towards liking it. After making this lasagne though, I’m definitely disliking the taste of it. However, it may very well be the fact that I made a lot of it to last me 6 meals, so that may be the reason why I started to dislike it after a while – but no; I won’t be purchasing kangaroo for a while. Maybe never again actually because I’ll be leaving Sydney soon and roo meat is DEFINITELY not available back home.

I actually ran out of mozzarella cheese when making the lasagne so I ended up adding tasty cheese as well because that was the only other cheese I had in the fridge – and I didn’t have much of it either. I have also doubled the quantities for the béchamel sauce as I found that I didn’t have enough for the meat filling recipe that I had.

Also, just a little side note, if you want to try this recipe out, DON’T lay the eggplant slices raw. They barely even cooked when the lasagne was in the oven. Took a bite, and it just ruined the dish for me. I had to take them out and cook them separately. Much hassles! So make sure you bake/grill/pan fry them before layering them in-between the meat and lasagne sheets. I mean, I already had this at the back of my head, that I needed to cook them first, but no, I didn’t. First amateur cook mistake for 2015 – yeap, I’m off to a good start.

For the meat filling

For the béchamel sauce 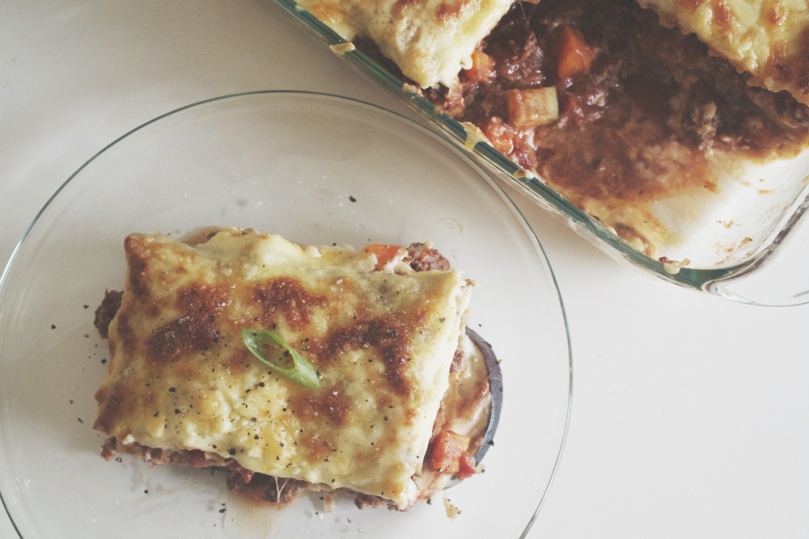