Hello Everyone! Today has been a particularly lazy day spent at home binging on Game of Thrones; now on the last episode of Season 3 and I must say, episode 9 was just brutal with the death of the Starks, just as Arya was about to reunite with her mother and elder brother. Sorry if I spoilt it for anyone; just don’t read the sentence before this! While on the topic of GoT, I totally ‘ship Arya and Gendry. 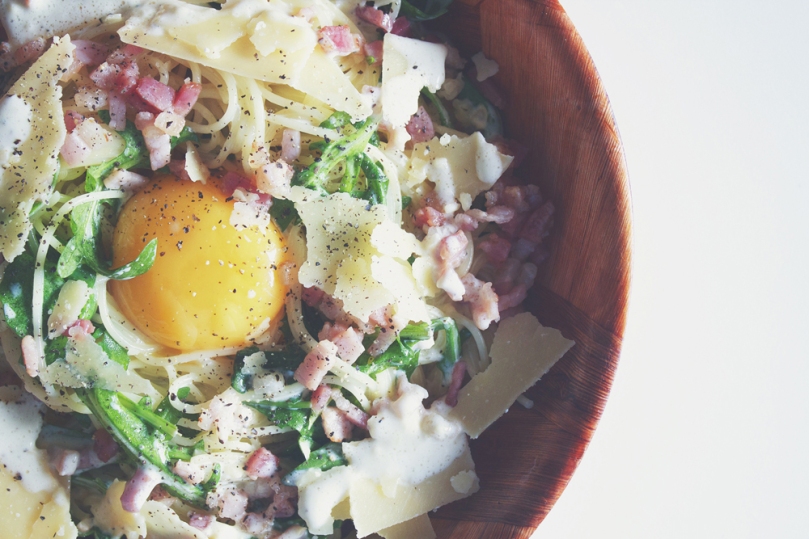 In other news, no I didn’t actually rip strands of hair from an angel; it is actually known as Capellini, literally translated: ‘little hair’, which is a very thin variety of pasta. As it is very thin and light, it goes well in soups or dressed with very light sauces. I did actually get out of bed today in between episodes and made myself lunch, and today I decided to whip up an easy angel hair carbonara. I was told once before that the key to a good carbonara was to add a dash of worcestershire sauce. Of course I didn’t believe the man (my ex-housemate’s friend) at first because he was piss-drunk at the backyard of the house that I used to live in. At first I was like “worcestershire sauce, really?” in my head, but I nodded and said that I would give it a try, but not that day. Today, I tried it with worcestershire sauce, and I must say that it actually tasted pretty good. Well, he is Italian so I guess he knew what he was talking about.

I’ve made carbonara two ways before; one with cream and one without. Personally, I prefer the first with cream. If you prefer without cream, just add a ratio of one egg to one egg yolk in a bowl together with some parmesan cheese, a bit of salt and ground black pepper. Beat well and pour over a pot of drained hot pasta, heat off. Mix well and allow the hot pasta to cook the egg. Add fried bacon bits and spinach or rocket leaves if you wish. 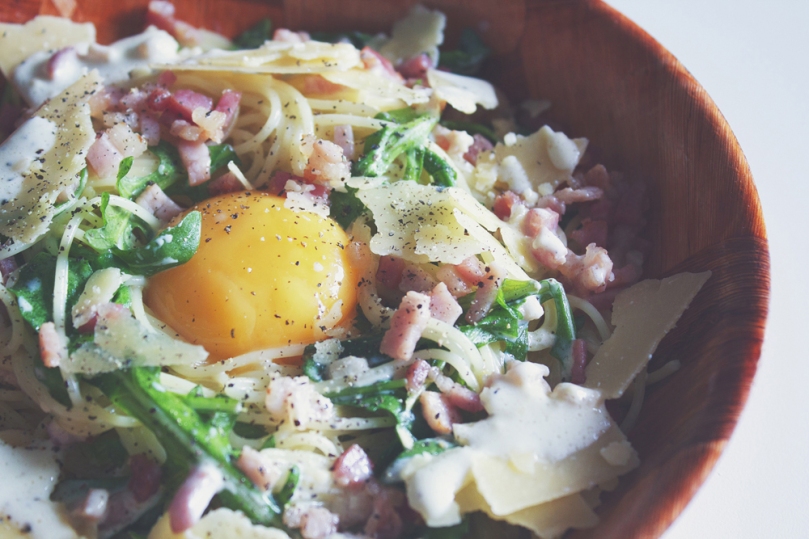 Not too long ago, I remember my friend saying to me that she missed my mom’s carbonara. Her’s is a little bit different since during that time I wasn’t even interested in cooking. She bought white sauce from a jar in the supermarkets and added minced chicken and sausages for her fettuccine carbonara. Even if it was jarred sauce, it was still a hit amongst my high school friends. They remembered how my mom used to pack extra lunch boxes on Thursday afternoon and delivered them to school during lunch break to share amongst my friends. I miss those days.