Hello Everyone! As I already mentioned in yesterday’s post, I have a very special recipe for all of you today as today is my Mother’s 55th Birthday! Not only that, it is also my Cousin’s 35th Birthday! A very Happy Birthday to the both of them! Not only do they share the same birthday, but they also share the same-ish name. My mom’s name is Josephine, while my cousin’s name is Joseph; and my mother is also his godmother in both his baptismal and wedding. So yes, these two people are very important to me.

Happy Birthday to my mom Josephine & my cousin Joseph Russell! This is the latest photo that I could find of the two of them. This photograph dates back to December 2012 when my cousin JR got married. Kuya J, payat mo oh! Anyare? Hehehe.

To be completely honest, this cake has given me a lot of headaches to the point where I just had to redo everything again. The plan was to bake it the day before so that it would be in the fridge overnight; that obviously didn’t happened. Something went wrong in the batter; it was very pale and it looked like the batter and the eggs whites separated because when I took them out of the oven, the top half was very airy white the bottom half was cake-y. Since I had quite a tiring day yesterday, I gave up on baking the cake and decided to bake it early the next morning (today). The cake this time went well, I just mixed the batter very well and added some food colouring to bring out the purple a bit more. 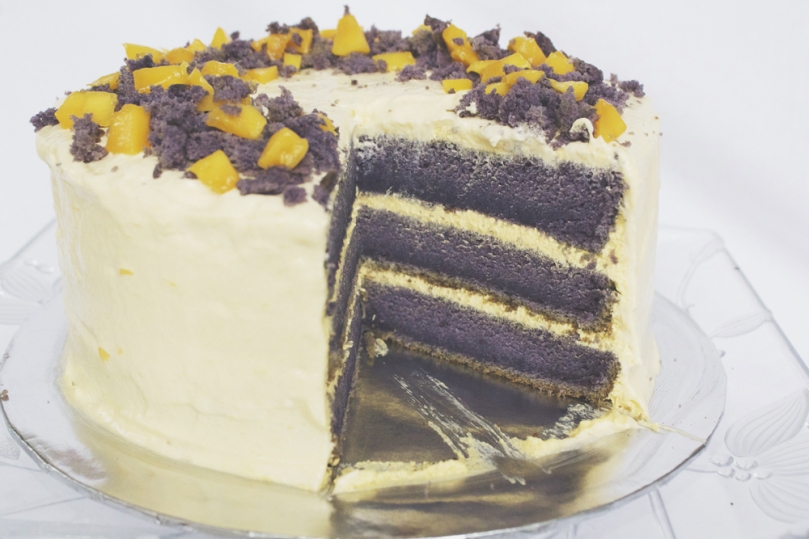 However, today my frosting decided that it wanted to wreck havoc. The frosting was actually an experiment, because I wanted to incorporate mango into the cream cheese frosting somehow. The big mistake that I did was that I mixed the mango purée together with the cream cheese and and butter instead of smoothening out the cream cheese and butter first. I ended up with a mess of what looked like really bad scrambled eggs. I tried so hard to save it, but in the end I started all over again. At one point I kind of just had about enough with this cake… But I told myself to carry on because it’s a special cake for my Mom’s Birthday! The flavours were all there, form the cake in the beginning, and even the frosting, but it would’ve ended up looking like a shit cake if I hadn’t redone the whole thing.

Anyway, all mishaps aside, the cake turned out to be pretty good! But what decided to ruin everything yet once again was the weather. It was pitch black and raining when I was about to do the final touches on the cake and I have no natural light to photograph my cake. I am so devastated. It was as if everything was trying to ruin this cake for me… Thank goodness that it was still a little bit bright outside, but I really had to put my ISO up and decrease my shutter speed to get some light! 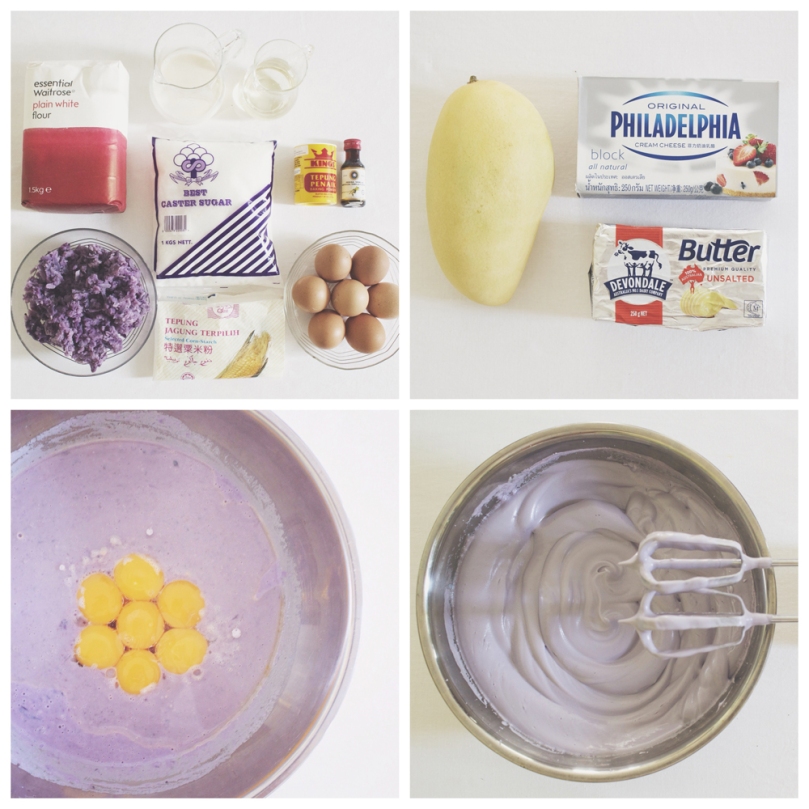 For the cake batter

*I barely use cake flour, and if you so happen as to not have cake flour in your pantry, you can substitute 1 cup of cake flour with 2 tablespoons of corn flour place into a measuring cup and then filling it with plain flour all the way to the 1 cup mark.

**Place the ube (leaving its skin on) in a pot of boiling water and boil for about 45 minutes to an hour, depending on how big it is, or until tender. Peel off its skin and then grate.

***If you’re like me and you don’t have corn syrup sitting in your pantry because you barely use it anyway, you can substitute corn syrup by dissolving 3/4 cup of granulated sugar in 1/4 cup of boiling water.

There was an error retrieving images from Instagram. An attempt will be remade in a few minutes.