Hello Everyone! Yes, I’m still trying to play catch up here and hoping to get everything back to order by the time April sneaks up on us. I’ve been trying very hard to get recipes up on the blog for the past week, but I just never got around to because of, well, I was going to say several factors, but after running them by my head just a second ago, there were really only two factors that affected my mood to write. The first being unnecessary workplace drama that put me in such a mood for the past week, and second, it’s that time of month. You can imagine the rollercoaster of emotions I went through – I was just glad the the working week was over by the time it was Saturday, but it doesn’t help that I’ll be back to work again tomorrow. Seriously, a one-day weekend definitely NOT enough.

All that aside though, I watched Beauty and the Beast on Thursday night with my Mom and my sister. Belle could not have been played any better than Emma Watson; she was just an absolute fit for that role. Not only was she the definition of “Belle”, her singing was also on point. The movie just brought back many childhood memories, and I may have shredded a few tears here and there throughout the movie, and sung along to the songs while I saw people just snapchatting or Instagram storying the sh*t out of the movie – like put your phones away you uncultured and uneducated youngsters!

Anyway, tonight’s recipe is the last of the banana recipes that was supposed to be covered last month, and one that I stumbled upon through my research when I was planning for Amcarmen’s Kitchen early on the year. I did’t want to make a whole batch of these, so I only made 4 rollups. Unfortunately for me, out of the 4 only one didn’t burst open so I do apologise if the photographs for this recipe look a bit… Lonely. Hahaha! You can find the original recipe for these Banana Cheesecake Rollups over on The Cards We Drew. Also, just something to note, I tried this recipe out using puff pastry instead of crescent roll dough like in the original recipe. The reason? Nothing in particular actually aside from the fact that remade crescent roll doughs aren’t available here in Brunei and therefore I made the decision to use puff pastry instead. I also didn’t add the toppings to the rollups as I assumed that the dessert would already be too sweet for me to handle and with extra sweetness on top would probably be overkill for me. Feel free to top yours though if you’re a sweet tooth. 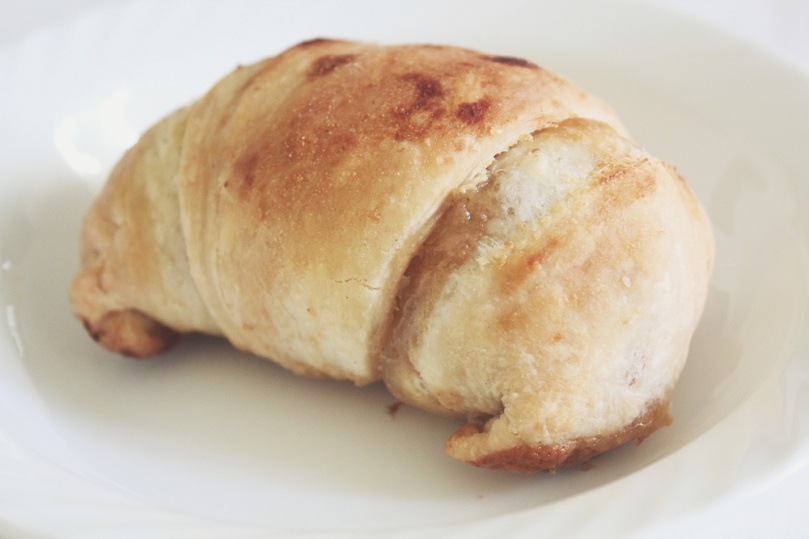 One thought on “Banana Cheesecake Rollups”