Hi Everyone! Hope you’re all having a lovely day wherever you are. My name is Brendon D’Souza and I am a writer and food blogger from Sydney. I’m very honoured to be a part of this Auguest series and have some exciting dessert creations to share with you over the next two posts.

I launched my website Brendon The Smiling Chef in 2012, posting simple recipes that I had cooked for dinner. I developed skills in food styling and photography through internships and writing and editing roles at Green Lifestyle, Grapeshot, Australian Catholics and Youth Food Movement Australia and started to apply these skills to my recipe posts. This year I plan to make a few exciting changes with the website and include a restaurant review section called “Smiling & Dining @” which features reviews that I publish at Zomato While you’re there feel free to check out all my foodie adventures in Instagram at @brendonthesmilingchef.

I met Ally a few months ago at a food blogging seminar held in Sydney and she told me all about her passion for exploring cultures through food, which is something that I too love! We caught up a few weeks ago for a fabulous cooking day where she showed me how to make some delicious Filipino recipes (Which you can check out at Brendon The Smiling Chef next week). The recipe that I’m going to share with you today is a bit of an invention that I have drawn from my experiences of growing up here in Australia. Like Ally, I too am a bit of a third-culture foodie. My family are Indian and are originally from the state of Goa which sits on the West Coast of India. Goa is largely influenced by the Portuguese, who colonised the region in around the 16th Century, so our culture, customs and cuisine are surprisingly similar to Europe. I was born in Bahrain and lived there for two years before we migrated to Australia in the mid-nineties.

Growing up in Western Sydney, I was surrounded by a wealth of multicultural diversity and from a young age I was introduced to the cultures and cuisines of the Philippines, Southern America, Malta and Vietnam to name a few. Despite all this I have to admit that as a child I was very embarrassed about being Indian. It’s one of side-effects of growing up in Anglo-Saxon society. I saw myself as different from all the other kids at school. I had black hair, brown skin and brown eyes rather than blonde hair and blue eyes. Now that we’ve all grown up, a lot of my friends have said that they experienced these feelings too! I would cringe when I opened my lunchbox to find the beautiful Goan prawn curry and rice that mum had packed for me. What would the other kids think? We never really ate much Indian food at home when we were younger because my sister and I, being True Blue Aussies, didn’t like the pungent spices used in most of our cooking. They were too hot for our tiny tastebuds to handle. In these instances, six-year-old Brendon would drag a chair to the kitchen and reach for a jar of tomato paste sauce to put together my version of Spaghetti Bolognese; 1 kilogram of beef mince with 1 jar of tomato paste, yes paste (#IcantbelieveIdidthat), stirred through.

The 2000’s came along we noticed a number of American food products appearing on the supermarket shelves including Pop Tarts, Oreos, and Krispy Kreme Donuts. My favourite was Hershey’s Cookies ’n’ Creme bar, (or the Mars® counterpart Dove), a dreamy combination of white chocolate with tiny chocolate cookie pieces. It was ever popular among my Filipino friends. They had experienced this delight for years because it was sold in all the Filipino grocery stores. We saw it as a luxury because it was so new! It became one of my favourite flavour combos and, to nine-year-old Brendon’s delight, even started appearing in ice creams and cheesecakes!

I was playing around with the idea of reinventing Cookies and Cream and turning it into a sophisticated dessert. Chocolate chip cookies would definitely feature because who doesn’t love a good chocolate chip cookie? A white chocolate and vanilla bean ganache could represent the Cream and a 70% dark chocolate ganache would balance the sweetness. It had been a while since I’d tried to make macarons from scratch but I thought it would be nice to have some chocolate almond cigars to add another texture and flavour to the dessert. We made up the recipe for these while referring to the Master Adriano Zumbo’s for rough measurements. They weren’t as smooth on top but they made delicious chewy cookies.

For the white chocolate and vanilla bean ganache

For the bitter dark chocolate ganache

For the chocolate almond cigars

Plate up the dessert

Ally and I had lots of fun with the plating. Check out our attempts. 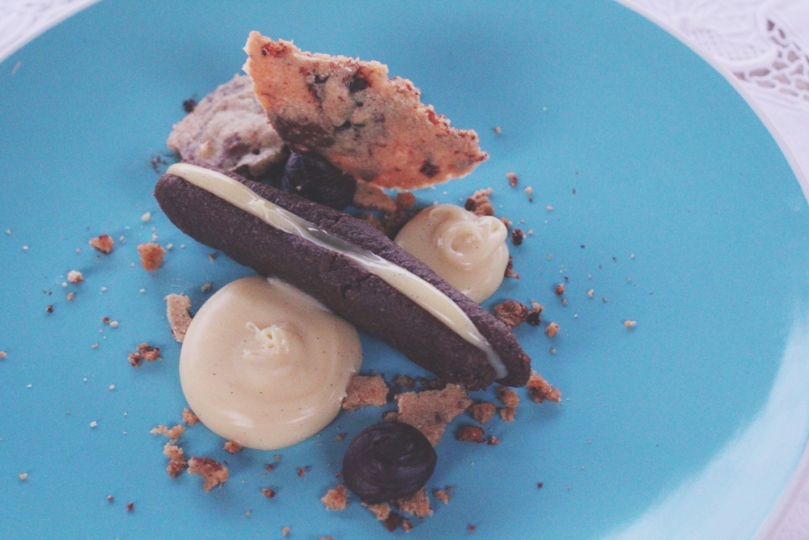