Hello Everyone! First off, apologies as I did say in my last post that I’d get this up within the week where I posted about Amcarmen’s Kitchen turning 4 last week! (Unnecessary) things got in the way which was why I wasn’t able to get this up. So to make up for that, since after this post I still have one more Smoothie Bowl recipe to share with all of you, I’ll ATTEMPT to get that up for you before May rolls in. Bare in mind that I will be flying off once again tomorrow, hence also why this post is going up on a Tuesday instead of my usual Wednesday post schedule, so my attempt may already be void at this point *cheeky grin* but for you guys, I will try my best to.

Moving on, here is tonight’s recipe for a devilishly delicious Dark Chocolate, PB, and Banana Smoothie Bowl! So incase you guys haven’t been following my Instagram pages, I got back from a 5-day business trip to Hong Kong two Sundays ago. I’ve italicised ‘business’ because well, though yes it was for business, it was also sort of a mini-vacation. It was my first time to travel to Hong Kong as well so I made sure that I made the most out of the trip, outside of business hours that is. Though it was a fun trip, both on the business and vacation side to it, I was super exhausted and sleep deprived from the trip when I got back. It’s not that I was out partying every single night until the wee hours of dawn, but rather my roommate/colleague basically kept me up all night. She snores like a helicopter continuously hovering over me and talks in her sleep. I’m a very sensitive sleeper and this for me was just… Pure torture. I probably collectively only slept 8-10 hours during that 5 day trip, and the hard part was, I couldn’t even take naps in between because she snores in her naps too. I’m definitely requesting for separate rooms if I ever have to travel with her again. At least I’ll be travelling by myself to the Philippines tomorrow so I won’t have to worry about a snore fest for the upcoming 5 days (thank God).

Rant over. So Dark Chocolate, PB, and Banana? In a smoothie bowl? For breakfast? Don’t mind if I do! Classic flavour combinations for those who prefer to start their mornings off on a sweet note. Now you may notice that in the ingredients shot below that the jar of peanut butter is missing… So here’s what happened, that day I was making two different smoothie bowls for a Sunday afternoon snack, therefore I took two ingredient shots that day. The jar of peanut butter found it’s way into the other shot (which by the way doesn’t need peanut butter) and I only realised it after I was going through the photographs I took a few days later – silly me! Oh well, so ignore the jar of peanut butter in the next recipe post!

For the smoothie mixture

*I used Whittaker’s Marlborough Sea Salt and Caramel Brittle Chocolate for this recipe – super yum with that hint of salt and sweet caramel. 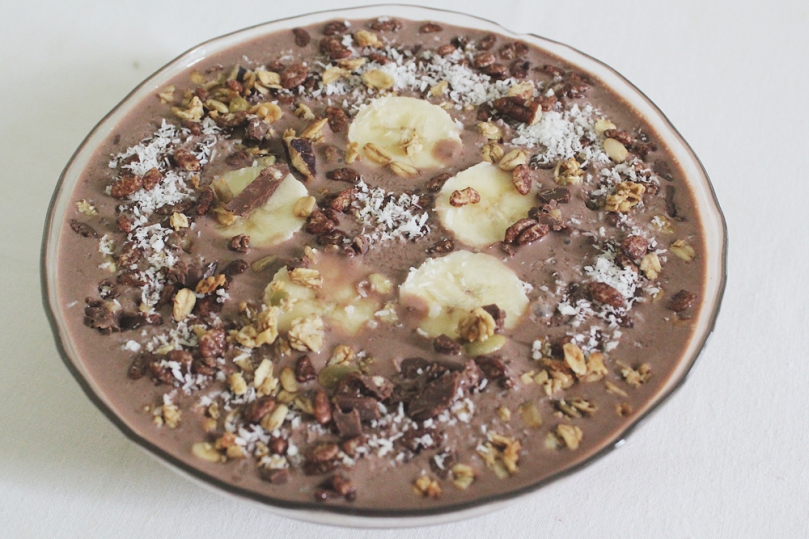